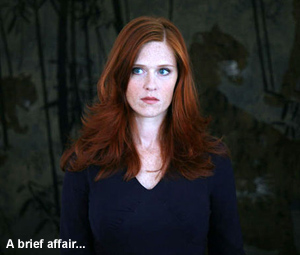 Normally I don’t do French.

Not unless it features Audrey Tautou anyway.

But after forays into Scandinavian TV drama the wife and I decided to expand our European wings, so to speak, and try a French police drama that had been recommended to us: Engrenages or Spiral as it has been translated over here (though my wife tells me Gears would have been a more accurate translation).

It has been something of an eye-opener.

I’m not sure how accurate a depiction it is but the Parisian police force in Spiral operate like something out of a Gene Hunt wet dream. Foxy, elven Captain Laure Berthaud (Caroline Proust) seems quite happy to have casual sex with her male colleagues – indeed seems decidedly unhappy if she finds herself in a situation where she is not getting any at all. And then there is stunning redhead Josephine Karlsson (the magnifique Audrey Fleurot - see picture above), a maverick defence lawyer who is unhappy unless she is accepting casual monies from all and sundry for activities that cross and re-cross the legal divide as often as she crosses and uncrosses her perfectly stockinged legs.

My wife will no doubt accuse me of gross injustice if I don’t mention the high male eye candy ratio but... nah. Can’t be bothered. Apparently there is plenty of boy-sugar floating around for the ladies but personally I don’t see it. I mean, they’re French, for Heaven’s sake! Urgh!

But actually what impinges most on me about this portrayal of the French police is the sheer continuous nonchalant brutality of how they operate. Gene Hunt would cream his polyester slacks. I’ve lost count of how many suspects I have seen handcuffed to a chair and bitch slapped, pate slapped, hair-grabbed and kicked over onto the floor. In fact the only suspects I haven’t seen kicked off a chair are young teens and women and I suspect the only reason for that is that it would make for questionable telly viewing.

Interviews seems to be conducted in the police captain’s office without a lawyer being present and without benefit of some kind of recording device being activated. Occasionally the Captain’s superior might pop his head around the door, give a Gallic shrug and complain about the noise being a little excessive but otherwise anything goes. The suspect then signs his statement – handily written by the police – and is taken to Monsieur Le Judge where his case is weighed up and a decision taken as to whether it’s worth taking him to the Justice Courts where Josephine Karlsson will either get him off or drop him further into the merde depending on who’s paid her wages this week.

I don’t want to stoop to national stereotyping but just as The Killing portrays the cool, calculating essence of the Danes so Spiral seems to capture the essence of the French. Or at least the essence of how we, the ignorant, arrogant English imagine the French to be: driven by physical appetites, yet somehow cold with a limited emotional range and with a total of 3 facial expressions: smile, frown, moue. The greatest and most used of these being the moue. The moue it seems can be used when faced with insults, teasing, accusations of wrong doing, a refusal to have sex, demotion, an acceptance to have sex, before and after sex, possibly during sex and when you discover your chief suspect has just been torched in the back of a Citroen a la barbecue.

Is this really how the French police force works? Are they really, genuinely that French? French to the power 100?

Whatever, it makes for great drama and whereas Season One was a bit patchy, Season Two which the wife and I are just about to complete has been absolument superbe.

Do yourself a favour. Try a little French tonight. You might like it. And if in doubt just think of Gene Hunt with garlic breath.

Got to be a winner, right?

It sounds like hokum with garlic and onions. But it might be worth watching for the sex scenes, which the French are usually good at. I realise this is asking a lot of your powers of discernment, but have you noticed anything different about the sex scenes?

And I thought it was going to be about yoghurt! How do we watch this petit french treat? DVD or telly - quoi cherie?

Ah, les Engrenades. Loved the first series which watched in the good old days of cable TV but now we're in the stick, we have a couple of sheep in a wheel supplying our broadband so no chance to see the next series.

Until last year, French arrestees had no right to be interviewed in the presence of a lawyer so brutality was rife and unseen. There are plenty of secret films of French police beating up some poor unfortunate bastard (or should that be batard)on YouTube to suggest that it is quite likely true. Don't know about the sex bit though.

Well spurred on by the need to corroborate your review, I went to the web site in the hope of catching some juicy action. Unfortunately, in typical Gallic fashion it wouldn't work...just like my old Citroen. However one or two of the stills made me wince.

Limited acting ability but we overlook that as we explore the underbelly of France...

You don't see anyone eating croissants either in these series as I recall....and if they're sitting at a cafe table on the pavement it's to avoid the bugs in their offices...

Ah thx for recommendation! I don't know much french, except the kissing part - and that is mostly good! : )x

Gorilla Bananas: yes; they were subtitled.

MMM: Season 1-3 is available on DVD and Season 4 is out shortly. I believe the Beeb have been televising them over here – probably on BBC4.

Previously (Very) Lost in France: nice to know the French scriptwriters employ someverisimilitude in their interview scenes then. I’m sure the sex scenes are all made up. Nobody could be that good. ;-)

Nota Bene: with pleasure or pain?

The fly in the web: I saw it as a drama... now I see that it might actually be a documentary...

Katriina: and for everything in between there is the universal moue...

I have to check this term right now- unfamiliar!

ah Audrey Tatou
now there's a woman I could almost be straight for.... simply the most beautiful thing I have ever seen

It's fun, but it has about as much in common with reality as "Life on Mars."

For a start, no-one could afford hosery of that quality on French police wages.

John: we are in total agreement. Unless I am also sharing a room with Keeley Hawes.

Jon: the lingerie always gives it away.

Sounds a bit like how a police station would be run if I were in charge. Except I don't own any expensive hosiery.

Being Me: so yours would be an English police station...?