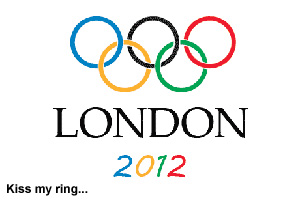 I’m not a fan of the Olympics.

Or any kind of televised sports thing really. I don’t particularly enjoy Wimbledon. Horse racing gets my goat. Motor racing just sounds like a bunch of kids shouting “eeeooow” into a biscuit tin. Football I absolutely loathe. And golf is just stupid: a stupid sport to play, a stupid sport to go and watch and an even more stupid sport to attempt to televise.

I even hated it as a kid. I hated playing it at school. Football, rounders and, worst of all, cricket. I’d be one of the last to be picked for any team. I was always in the last 4 which is great if you’re a contestant on The Apprentice but not so great when you have all the cool kids lined up looking at you, trying to work out whether you’re more or less useless than the Buswell twins or Alan Winyard who would inevitably be the three other guys left waiting with me. To my dubious credit I’d be picked before these guys. I could catch a ball and, in football, had a dogged but ineffectual determination which made me ideal defender fodder. I was like a gnat worrying a bull a lot of the time. But at least I did something. I could be patronized with the best of them too – I made man of the match once for scoring a fluky goal. But even that success didn’t convert me.

I hated watching sport as a kid too. Sport on the telly meant no cartoons or James Bond film. It meant painfully long Saturday afternoons in the 70’s with Dicky Davies and World of Sport. It meant my father watching football, motocross, rugby and then the interminable hour of the football results through teatime. I consider it progress that my boys will never have to suffer the hell of “Plymouth Argyll 1, Queen’s Park Rangers 2” uttered in a TV voice drier than Barbara Woodhouse’s ashes.

So I will not be getting on board for Olympic fever. Up until now I haven’t even bothered myself to write about it. It’s felt like the recession. It’s there, we all know it’s there, why waste our breath talking about it? But this torch thing. It’s everywhere. It’s coming to my home town. It’s coming past the building where I work although I’m not allowed to talk about that here. Every day there are updates on the TV about where the torch is right now and which paraplegic bus conductor is currently carrying it another mile on its journey.

Stupidly I thought there was just one torch and, in the true nature of a relay, it would get given to the next runner, and the next. But no. Everyone gets a new torch. Seems a phenomenal waste of money to me but then what a perfect metaphor for the whole event. I believe some of the torch bearers are even selling their torches on eBay. I’m tempted. I really am. You’d get a helluva lot of ice cream in one of those cones.

I won’t be watching the Olympics this summer. Aside from the opening ceremony, that is. That might be worth a laugh. I’m hoping Boris Johnson will leap out of a double-decker bus, naked apart from a pair of Austin Powers glasses and some novelty sock suspenders. After that I’m switching off. I’ll be hitting my DVD boxed sets or, if push comes to shove, Dave. I’m deliberately not coming to the party or joining in.

I suspect it will just be me, the Buswell twins and Alan Winyard but you know what? For once I don’t care. I’m deliberately not picking myself for the Olympic team. I’m happy to be left out. Happy to be less useful than those of you who can throw a ball straight.

Sport always kicked me in the shins and made me feel less worthy. It took away my dignity and my self-confidence. It made everything a competition that only the biggest and the fastest could win.

And most of all I am doing it for the British Olympic team.

I know you won’t let me down.

Don't give up on sport. At the rate they're inventing new events, there's bound to one you're good at. I'd back you any day in a "Beardie Yodelling and Poetry" competition. Have you got a lute?

Maybe the organizers should consider donating the torches to the municipalities they pass through. That's the kind of thing that has a rightful place on the wall of city-hall and more people will "profit", although not monetarily.
I still believe in the glory of team spirit, patriotism, good sportsmanship and graceful losers. (That's the world according to this effing pony). I probably shouldn't be watching either. It might burst my bubble:(

Gorilla Bananas: I can play the one-string bass?

English Rider: I suspect your bubble will be well and truly burst. And you're right about the torches... they should be given to local museums and schools.

Libby: I bet it's so big it's worth a street party all on its own!

The purpose of holding the Olympics seems to be to give all the sport industry freeloaders a luxury holiday at the expense of the local inhabitants who can't even get a ticket to see the events.

The fly in the web: that's it exactly but they can't fit that on the logo.

That'll be Ladies Beach Volleyball off the menu then?Have a great weekend my friend.

Steve I am with you on this.

Tenon_Saw: we can be on the subs bench together knowing we will never ever get picked.

Torches being used as serving cones for ice cream. Now there's a thought. I was usually picked close to last too. But they were torn. I was ok at sport, they just didn't want me.

Being Me: when I pick my team you'll be picked first. Right before anybody. We'll be like Avengers Assemble. Only without the super-powers... other than that, exactly the same.

Steve, rumour has it that pole dancing is also being considered for inclusion among the Olympic sports...

Katriina: yeah, but have you seen the Russian team? They're damned scary!

Not as scary as the Bunch of Babushki who will be singing at the Eurovision tonight. Can't wait to get your take on that pile of cack!

Nana Go-Go: have you seen the old codger we're wheeling out? Apparently next year we're digging up Roy Orbison...

I'm on this boycott with you my friend - I love 'leisure'sports like cycling down the road and back, swimming leisurely for the hell of it... but never one to compete... and certainly never EVER to waste my time watching it! AND TO TOP IT ALL - Olympics is going to be major pain in the butt for me in London! If there is a flag I can fly outside my house in support of the boycott, let me know! :)x

Hannah: I'm designing one as we speak. A cross between the Lottery logo and Churchill's favourite hand gesture.

I only ever watch the men's sprints, in slow motion - all that junk bouncing about in lycra - captivating! :-)

"I won’t be watching the Olympics this summer. Aside from the opening ceremony, that is. That might be worth a laugh." Have you been watching me rehearse?

Nota Bene: the next time you plie it's going on YouTube.