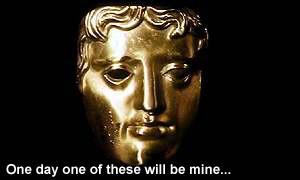 The wife and I made the mistake of watching the BAFTAs last night.

I say mistake because the BAFTAs are a viewing pleasure that is by turns guilt inducing and frustrating.

Guilt inducing because you know this is a horribly cliquey, elitist, uber-lovey event that you really ought to sneer at and boycott. And frustrating because the winners inevitably do not match up to your own personal BAFTA winner’s list that you’ve drawn up completely ad hoc as the names of the shortlisted nominees were being read out.

In my BAFTA award ceremony Miranda Hart, Benedict Cumberbatch, Fresh Meat and Misfits were all winners. But plainly I am out of touch with the official BAFTA judges because they all came away with absolutely nothing. Not a sausage. And I very much would have liked to have given Miranda Hart a sausage.

Best part of the night was Rolf Harris getting some kind of fellowship award. Fellowship of the ring, perhaps? He’d certainly terrify the Orcs of Mordor with his impressive didgeridoo blowing. Worst part of the night was some actor twat (whose name I have intentionally chosen not to remember)  deliberately not reading out the names of the Best International Drama winners because they were Danish and he couldn’t be bothered to learn how to pronounce them. Of course, he didn’t actually say that. He just joked, “ho ho... I’m not even going to attempt to read out these names... ho ho... aren’t I cool?” Actually he didn’t really say that either but something very close to it. How rude. Learn the names of the winners next time, matey. Show some respect. The best part of it was one of the names was “Adam Price”. How difficult is that to pronounce? Obviously Mr Actor had lost considerable dexterity in his tongue after years of bum licking his way up the greasy poles of RADA .

So why do I watch the BAFTAs then, when all I do is sneer and sigh and stamp my feet?

Because I have a dream that one day I will be there, that’s why. One day it will be me getting the top writer’s award like Steven Moffat did last night (well deserved). It’ll be me expressing genuine surprise when I am called up to the stage by Miranda Hart to accept a prestigious BAFTA award because I really, genuinely was not expecting it, so much so that I haven’t even prepared a proper speech or anything but I would like to thank my wife and kids and [reels off a long list of showbiz celeb pals]. And best of all it’ll be me kicking twatty Actor chappie in the pants and telling him next time to get an effing language coach (no pun intended)!

Until then all I can do is sit and watch and sigh and gnash my teeth at all those who are lucky enough to be there right now but squander the opportunity with poorly prepared presentation speeches and crap jokes and smug looks to the camera because they are out on an industry jolly.

One day these people will all be my friends and colleagues and I will have to play the game.

But until then I can say what I damn well like about them.

And surely that is as good as any kind of BAFTA award?

I left the room as soon as it the damn program came on and went to water the veg garden. I can't stand this sort of self-congratulatory bollocks and think they should all be sent to the salt mines. Especially that Harry Hill.

Jon: you'll be pleased to know he won not a dickie-bird. Fight? Too busy scoffing.

You've got a lot of arse-licking to catch up on before you hit the big time. The problem is you want to lick all the wrong arses. Miranda Hart's would result in negligible elevation and total suffocation.

I look forward to the day that Miranda Hart awards you a sausage...

I've not seen the show yet (was thinking of watching on iplayer tonight whilst tackling the ironing—so rock n roll), but I never agree with the winners in any of these award thingys.

Anyway, I imagine as a writer you are allowed to be grumpy and won't need to be oily towards folk... well here's hoping anyway.

my toes curl at the very thought of the impromptu "banter" between the cringing actors who read out the nominations..... blah!
mr Cumberbatch, I agree should have won.... but Mr West is a real class act , so I didn't mind too much

I still find it facinating however that Dominic got a mention for his win on ITV news.. and Emily Watson, ( a much bigger star) didnt get a titter for hers...
I thought sexism was dead
hey ho

You'll have all sort of NEW friends ... when finally there at BAFTAs, I'm sure... and you'll probably lose some good ones on the way up too! Still, all my fingers crossed for your wishes to come true one day! Never stop dreaming! : )

I noticed that about the dickhead who wouldn't announce the winners, and like you, was also cross that my faves didn't win (nothing for Miranda, or Sherlock? What?)So want to be in the audience when you grace the podium Steve. Vix x

Gorilla Bananas: it depends where you are looking for the elevation.

The fly in the web: as long as it's high quality pork I'll be perfectly happy.

Very Bored in Catalunya: I hope as a human being and a father I'm allowed to be grumpy!

John: no sexism is alive and well and enjoying willy fights in the showers.

Hannah: dreaming is what keeps me going...

Vix: should that day ever happen there won't be a podium big enough to contain my ego.

Hope to see both you and my son at the BAFTA's one day! He's made a film which is being shown at the Edinburgh Short Film Festival because it's a short film....about a boxer....and it's very,very good. You can see it if you go to my Facebook page and click on his link.

Nana Go-Go: unless by some miracle my novel gets picked up by the BBC I think your boy might pip me to the post...!

Will your speech be as long as that when you do win? Will you slag it off as the "horribly cliquey, elitist, uber-lovey event" we all know it to be? Will you sob like Kate Winslet?

So many of them are so unprepared. So embarrassing. Dominic West had even forgotten his glasses so couldn't read the names off the auto cue - there he was, our best actor, squinting away and unable to say anything!

Rol: I'll sob all over Kate Winslet. I get horribly emotional post coitus.

Trish: you'd have thought they'd have learnt their lines off by heart rather than relying on an autocue! It's their job for God's sake. Best ones there were Steven Moffat, Matt Smith & Benedict Cumberbatch and Helen McCrory (Draco Malfoy's mum).

Have put the link on your Facebook page now - let me know what you think?Sorry to appear so exuberant but I haven't been this excited since......wish I could remember!!!Have a good week, O,Bearded One.

ps Dominic West is absolutely brilliant in 'The Wire', my third favourite American series after 'The Sopranos' and 'Mad Men'.

Nana Go-Go: very poliahed and professional. Very impressive indeed. Showed it all in the visuals though I loved the voice-over too. A Bafta winner of the future, for sure.

Haven't seen The Wire but did like Dominic West in The Hour.

I didn't rate '300' - all of those 12 packs were clearly computer enhanced!!!!Goodnight Champ!

Now you're free to speak as you wish. Make the most of it - when they are all your friends you will be horribly compromised. Delight in your current state of integrity, purity and freedom - for it will all be gone when your mates with twats who can't even read out a few names - the purpose of the job and reason he was there!! Your sould will wither when you joint their gang. I'll say "I remember him when he was a good writer but since he became a celeb his soul has withered to a raisin (californian sun dried - just like all the others). Is that what you want eh? Another victim of the man? Forget 'em - say "Sorr y, Ican't be your friend I'm too fond of my soul!"

I want to see eye-fanning and this when you get up there:

Otherwise, you won't be believable.

Nana Go-Go: 12 packs? You mean such things are unnatural?

Timbo: as long as I get a BAFTA I'm quite happy to sit at a table all by myself and "get real". I loathe raisins.

Being Me: I'm blinking away the t-t-tears even as I type! *sob"

We missed the BAFTA's because we were sitting in the garden eating steak from the bbq whilst drinking Pimms? Shame on us. Nor sure Miranda like chipolatas. Keep the tongue moist, you never know when that knock will come...

Nota Bene: chipolata? How dare you! I'm more of a cumberland man, myself...

I can't abide "award shows" of any ilk, I get grumpy about this subject...my toes curl at the back slapping pish, there you've made me grumpy
Happy now?

Löst Jimmy: but I know if I won a Bafta you wouldn't begrudge it me...