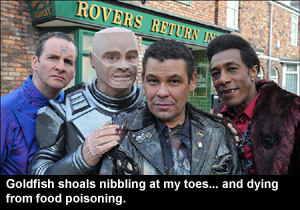 In a move sure to alienate my remaining 9 readers I must here apologize to Red Dwarf.

Back in your heyday I was proud to be a Red Dwarf geek. I watched religiously. I used the word “smeg”. And I wore your T-shorts with unironic pride. Smoke Me A Kipper I’ll Be Back For Breakfast was the one I was most proud of.

But during series 7 things went awry. The writing duo split due to artistic differences. Chris Barrie left meaning that Arnold Rimmer – always the lynchpin of the show for me – disappeared. I felt you lost your way. And because of that I never gave series 8 a chance. I was too quick to spot faults or take you to task over some comedic departure. And as for the 3-part special a couple of years ago... I got as far as recording Back To Earth but never watched it. I caught a glimpse of the middle episode and it all seemed too wrong. It all seemed too lazy and obvious. A storyline that treated the viewer with contempt. Like Bobby appearing in the shower in Dallas.  And the cast looked old and haggard. They looked like the residents of a nursing home dressed up in Dizzee Rascal’s cast-offs. Even Kryten had a paunch. I stopped recording and hit delete.

Red Dwarf was dead to me.

The nerd dream was over.

But this year, in an effort to teach our eldest boy about comedy and the joy of the classic British sitcom, we started working our way through the various boxed sets that I own. I had the complete Red Dwarf – minus the final 3-parter – and thought that the early ones at least exemplified all that was great and good about a classic British underdog sitcom.

To my surprise series 7, when we got to it, wasn’t as bad as I remembered it. And as for series 8... well spin my nipple nuts and ship me off to Alaska... series 8 was rather good. Considerably fine in places.

I’d misjudged the show. I can see now that, at the time, I’d become too precious about it. Too unyielding in my expectations. Sure Rimmer was a loss in series 7 but the Kochanski storylines added a bit of depth. And everybody’s return in series 8, although originally seen as a cop out, actually worked. Rimmer and Lister sharing a prison cell actually returned the show to what it had always been about. Banter. Dialogue. Not special effects and huge studio sets. Just the cut and thrust of insult and counter-insult.

Why did I not see this at the time?

I took a chance and bought the final 3-parter. We all watched it with baited breath.

Sure, the crew all looked old and haggard. But that kind of worked. They’d aged and mellowed. The script reflected this. And bugger me if Craig Charles, as Lister, didn’t even actually do some proper acting in a few of the scenes. Tears and wobbly upper lip and everything. And the Blade Runner pastiche worked too. The homage elevated the story and gave it some drive and purpose. A fitting final curtain call as curtain calls for sci-fi sitcoms go.

For those of you who are scorning this post... just take an honest look at yourselves. I bet a fair few of you were there in the early years. Watching. Laughing. Red Dwarf was our sitcom. It was our show. Sure we outgrew it, moved on, no longer thought it was nerd-cool enough. But for a time we had a bond.

All I’m saying is, it might be worth giving it a second go. A review.

If I still had my Smoke Me A Kipper T-shirt I’d be wearing it again today. And though the pride might be a bit self-conscious it would, nevertheless, still be there.

I guess that sometime we're just so stubbornly set on our 'believes' and 'principles' we don't give the 'new stuff' the chance... hence loosing out on potentially good things or entertainment in this case...

Oh Steve! I had completely forgotten about Red Dwarf! I loved that show so much. We taped it (back in the days of VHS) religiously every week and watched the episodes over and over again. Must get hold of the DVDs.

"Goldfish shoals nibbling at my toes...!"

Hannah: didn't think I was that old? Oh bless you. You've made my day.

Katriina: I have to say it's been quite a delight to sit through them again and re-assess them. The early ones are dated in terms of the sets and effects but the scripts still sparkle.

You seem to be an unofficial spokesman for the chumps and dullards who constitute the fan-base of these mediocre TV shows. If I were the producer, I'd invite you to the Xmas party to hand out presents with your beard dyed white.

I too loved Red Dwarf and agree that it went a bit wrong, but then got great again in the prison series. Thanks for reminding me. Just laughed at the thought of Rimmer dressed as Little Bo Peep...I'm off to Amazon to see how much the box set it.

Gorilla Bananas: what do you mean unofficial? I have it on my passport and CV and everything.

Dicky: my pleasure. I wish somehow now I could charge the BBC a commission.

i am a nerd....nerd first class btw
but I never took to this brand of humour.....i can watch it for an hour and not crack a smirk!!!

sos
at that time I think I was watching TENKO!

John: Tenko? That was hardly a barrel of laughs!

Red Dwarf was great full stop! Made only better by the fact that sometimes you could tell that the cast really meant some of the insults. Was series 7/8 when Craig Charles was on the old "space dust" and a jazz mag in the back of a Mondeo?
BBC 4xtra has been rerunning Red Dwarf stories read by Chris Barry recently, still very funny.

Joe: I think Craig's dalliance with "naughty Fridays" as he called them might have been series 8 or sometime after when he started work on Corrie. It's a pity Chris Barrie isn't on telly more - he was a great comic actor. We're currently going through The Brittas Empire too...

Löst Jimmy: that's beacuse you are a gentleman and a scholar of the finest order.

TimeWarden: let's just say I'd be quite happy to be the filling in
that sandwich.

I used to love it but the use of the horrible word smeg put me off!

Libby: it is indeed a horrible word and not necessarily a good thing that the show brought it to the public's wider consciousness however there is smeg all we can do about it now.