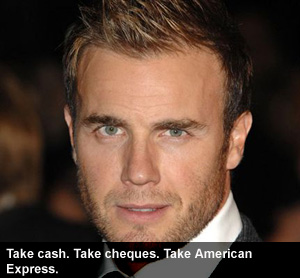 I didn't set out to watch Gary Barlow: On Her Majesty's Service, truly I didn't. I was just waiting for The Apprentice final to begin and found myself pitched in at the half way point.

About five minutes after that I wanted to retch up my spleen.

Oh I know the whole premise of the show was a huge Royal arse-kissing exercise with Gary Barlow puckering up his nice-boy-next-door lips and wiping off the residue with a napkin but I was gobsmacked at just how far the ex-Take That frontman was prepared to go in service to Her Majesty.

And can I just say right here, at the top of this mountain of invective, that I genuinely have no beef with The Royals. I am not anti-Royalist by any means though at the same time there is a noticeable absence of bunting from around my domicile this Bank Holiday weekend. I am a jockey who quite spectacularly rides the fence named "Couldn't Care Less Either Way".

I can only suppose from the title of the show that we were meant to see Gary as some kind of James Bond character, travelling the globe on a "mission impossible" to sample as much musical diversity as humanly possible armed only with a state-of-the-art laptop and a boom mic operator. In the last half hour that I saw Gary skipped his way across Africa, Jamaica, Australia and The Solomon Islands.

James Bond he wasn't. Suave and sophisticated he most certainly wasn't.

He was a stiff Englishman in a pair of shorts. And as patronizing as all hell.

But in a nice way. I need to stress the niceness of it actually. He was nice. He went out of his way to be nice. To be above and beyond nice. To stretch nicety to the point where a normal human being's mind would bow and bend and finally snap itself into the irredeemable realm of psychopathology.

He told a group of African musicians who had fashioned their own instruments from rubbish that their music was nice. He told an Aborgine classical guitar player that his music was really nice. Really, really nice. Hey, he was really pushing the boat on that one. The Aborigine guy had an English interpreter, prompting Gary to ask of the guy spoke English. Yes, Gary. He speaks the Queen's English better than you or I, the interpreter was there to convert his 1950's BBC tones into Mancunian slang the better to swing the meaning past your cloth-eared brain. After recording the quite superb guitar playing, Gary turned knowingly to the camera and said that he reckoned Mr Aborigine knew more English than he was cracking on... Gary nodded sagely and lowered his voice an octave to show that a great pearl of wisdom was about to drop out of his beared maw, "Just like the French."

Christ, if that is James Bond abroad then the British Secret Service is truly fucked. Musically we've been buggered for years.

And the end result? The masterpiece cobbled together by all this globetrotting?

They played it to the Queen with not only Gary present but also Andrew Lloyd Webber. I'm guessing his face was there to provide effective distraction from the music. The Queen sat tense and stiff like she was passing a gall stone. And that was before they'd even started playing the CD.

Gary had tried to capture the music of the world (or to be exact the Commonwealth) in the hope of coming up with something original and groundbreaking.

Instead all he produced was the background music to a bank advert or British Airways.

As the final notes faded out, I expected the voice of Sir Michael John Gambon to intone "HSBC - The World's Favourite Bank", just before the visuals cut to a stylized atlas highlighting all the cities of the world where you can get really appalling service from your bank.

The song said nothing about the Queen or the Jubilee or Britain or anything. The only thing that was Royal about it was one sample of Prince Harry slapping a tamborine about halfway through the song, and to be honest, I don't think Fairport Convention are going to be in a rush to sign him up.

What an enormous waste of money, energy, time and life. For you, for me and for The Queen.

Next time, Your Maj, might I suggest Engelbert Humperdinck?

Knob and Knobber are the names which spring to mind when talking of Gaz and The Webmaster in the same sentence!Glad you filled us all in on the details of the prog - saved me cringeing my way through it!
Old Queenie did not bad yesterday considering we're (supposed to be)in the year/decade/century of austerity.Still, she gained me two free gratis days of work - for that I shall be grateful.
Have fun.

Nana Go-Go: that's very true. Lest I be deemed ungrateful: your Maj, for the extra holiday I am right royally grateful.

Whaaat? You lot got a holiday? What're ye complaining about? Mind you, you did have to sit through that... So there was a trade-off.

"I'm guessing his face was there to provide effective distraction from the music".... harhar! am sure you're not wrong.

Being Me: The TV is full of it. On and on, day after day. God knows what people did before the invention of the DVD boxed set.

I understand they asked Morrissey, but he was too busy polishing his guillotine.

Rol: that's rather French. A good Enlgish axe will do the job much better.

They should have hired George Lazenby, he was a real special forces guy whose song was written by John Barry rather than wimpy Lloyd-Webber. Diana Rigg is Queen of the Congo Basin.

Ah poor old Gary Songs has rather been looking for a role in life since he left Take That and his album hit the skids. Maybe he could be a good will ambassador for Ovaltine and go around the world handing out nice cups of hot beverage to the Queen's subjects. It might prevent him composing the appalling world muzak that you allude to in your hilarious post.

Gorilla Bananas: with you there. Diana Rigg can explore my Congo Basin any day.

Emma: Ovaltine? His music is the melodic version of chloroform. Sweet, cloying and ultimately suffocating. Plainly he doesn't want the Queen to see another Jubilee and has left his CD on endless Repeat.

About Last Weekend: Englebert Hump would have done her fullstop and she would have loved it.

Sounds as though it was a bit like Gaz sampling the most delicious foods the Commonwealth had to offer and then regurgitating it all onto a pretty plate as a special treat for Her Majesty. It was never really quite going to work.

Now now go back to bed and get out the other side....

Katriina: following that anology he came up with Pot Noodle and chips.

Nota Bene: getting out of bed any side is guaranteed to put me in a bad mood.

Just the drummers would have been far more entertaining. I agree - the song is mush.

Fran: ironic, isn't it? The drummers were playing rubbish but sounded brilliant whereas Gary had all that technology and sounded rubbish.

I kept flicking over from a very entertaining Indian Ocean program on BBC2 to see that smug git cheesing all over the place. Although, on balance, I was probably more upset when OH flicked the channel over last night to see Elton John singing badly and Rolf (Aussie) Harris wearing a Union Jack shirt and pontificating about how bloody great Queenie is.

I heard the (jubilee) song on Chris Evan's breakfast show, the bugger thought it would be great to play it twice in a row. I think my ears are still bleeding.

The whole Jubilee affair has left a bitter taste in my mouth and I don't even live in the UK. I'd be mighty miffed if my local swimming pool/library/sure start centre had closed and then watched billions of pounds squandered on some old bird who should have abdicated years ago.

Austerity? Well, obviously not for the upper classes!

Very Bored in Catalunya: the state of the nation is such that Gary B could have recorded himself farting into a biscuit tin and everybody would still have been happy because they got 2 days off work in a row.

TimeWarden: and indeed I was aghast.

Yes the ever-present Gary Barlow was a bit of a shock to me over the jubilee weekend I must say. I do have a soft spot for him, although heaven knows why. He came across as dim-but-pleasantly-candid in that song documentary, but certainly not ground breakingly innovative.

Seeing him tenderly chaperone the Queen onto the stage at the end of the concert was the last straw, it made me guffaw in disbelief, and I almost choked on my celebration champagne.

Ali: I lost count of how many times I gagged on my Vimto last weekend....

Hahahaha I totally missed this - jubilee as well as your post! : D Exactly the reason why I didn't hang around for the whole charade ... :)

Hannah: we would have loved to have left the country but not watching any telly worked just as well.

He earns his gong with obsequious oiliness.