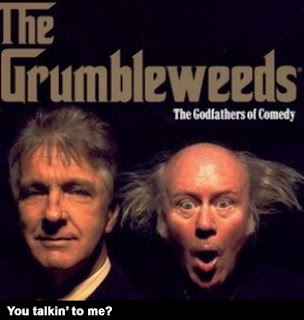 It struck me the other day how little television my boys watch. Their TV time seems to be confined to meal times; times when, by necessity, their hands are too full of cutlery to be able to manipulate a joypad or a game controller. And even then, half the time, they’re not soaking up some faceless TV scheduler’s entertainment menu but are watching a DVD or something we’ve pre-recorded and stored on the set-top box.

How different things were when I was a kid.

There was no choice other than ITV and BBC. By the time I was on the scene the Beeb was for old traditionalists (my grandparents were big BBC-ers) and ITV was for young thrusting hip-young things (which enticed my parents into its viewing fold).

Hence I never watched Doctor Who as a child because it was on the BBC and we rarely watched the BBC. The BBC seemed glamorous to me, simply because it was forbidden fruit. Or seemed that way. I seem to remember watching Bod and the Mr Men as a child and they were definitely BBC. I suspect my parent’s ITV leanings were abandoned temporarily when the BBC’s kid’s hour was on as a tactic to keep me and my sisters quiet and malleable for a little while longer.

My overriding memory of my pre-teen telly though is that on the whole it felt rather tawdry. But maybe that was just the seventies? Sure, I have fond memories of Daktari, Tarzan and Robinson Crusoe on a Saturday morning and, of course, the magnificent Tiswas… but overshadowing all these is the over-arching memory of how utterly awful weekend telly was for kids in the seventies.

My trouble was I never really “played out” as a kid. I wasn’t a street kid. I didn’t learn to ride a bike until my twenties. I was stuck indoors. My window on the world, on reality, was via the TV. Via ITV.

And on a weekend ITV delivered The Grumbleweeds. It coughed up Russ Abbott’s Madhouse. It vomited out 3-2-1. Recalling Bullseye and Family Fortunes – the latter even fronted by the great Bob Monkhouse – make me depressed in equal measure. I sometimes think that no telly at all would have been better.

For some reason, when I think of all these shows they appear in my mind as if nicotine stained. As if dyed brown with tobacco juice. I think tank-tops and brown plaid. And orange shirts. And carbuncly men with faces like blighted potatoes and working men’s club accents holding microphones topped with full-sized afros. I recall the subconscious despair that I lived with before the obvious question finally formed itself in my burgeoning little brain: is this it? Is this all that life has to offer?

The answer, of course, was no. There was the BBC. And the multi-coloured Swapshop revolution of the eighties. And then Channel 4. And satellite television. And cable. And eventually digital. And HD. And iPlayer. And choice.

How far we have come since Ted Rogers and Dusty Bin. For me, the mid-eighties is when television began to come good. When the new TV choices that became available began to heal some of the deep-seated wounds of the drab seventies.

I’m not sure what TV memories my boys will have when they are older. I don’t think it is possible for computer games to impinge on the memory in quite the same the way that a TV show does (yeah, I remember pressing LEFT RIGHT RIGHT and the X button on that particular day doesn’t cut the same mustard as remembering when Stu-pot and his mates finally faced down Gripper Stebson in Grange Hill) and I sometimes worry that they’re missing out on the shared peer experience of watching a truly great TV show at the exact same time that your mates are in their own houses.

But on the whole, if they’re being spared 3-2-1 and The Grumbleweeds, I am reconciled that the good effects of progress outweigh the bad. And it does seem to be that, these days, what you play is far more important than what you watch.

As for me though, I think I’ll pass up on Halo and get Daktari on DVD. I’m sure old wine in a new wine skin will taste just as good. But if my boys would rather play outside than watch it with me, I’ll be inclined to let them.
Posted by Steve at Monday, April 29, 2013
Email ThisBlogThis!Share to TwitterShare to FacebookShare to Pinterest
Labels: 70's, 80s, BBC, BobMonkhouse, childhood, DoctorWho, eighties, gamesconsoles, grandparents, ITV, kids, kidsTV, memory, PlayStation, reminiscing, seventies, technology, television, TISWAS, XBox

Wait, the Grumbleweeds were on the telly too? We only ever listened to them on the radio but since my parents were incredibly establishment, they only ever watched the BBC which might explain why I never saw them (only heard them)!

Alex: they had an early evening TV slot on a Saturday during the late seventies to early eighties, I think. Certainly the latter. I feel horribly traumatized by seeing the guy with the wispy hair gurning to camera.

I'll agree Steve that most television is a good reason to reach for the "off" button on the remote. But to appreciate how good ours is (in comparison) try watching american television. It's almost uniformly awful.

Craig: true. And Fox News is always funnier than the Grumbleweeds ever were.

No Dr Who? It sounds as if you weren't allowed to watch all the popular stuff that everyone else was watching. And what about Dallas? Don't tell me you never saw J.R. sparring with the Poisoned Dwarf?

I was twelve before a television crossed our threshold...and then I always seemed either to be out, or having supper, or being sent to bed, so the programmes did not really register.

I do remember student common rooms being hushed for episodes of Noggin the Nog, though...

The fly in the web: in my day students went for much less intellectual fare... Neighbours.

Goodness that takes me back....
Sunday night TV,..... Bleeding Jess Yates pontificating on STARS ON SUNDAY
How I hated Sundays

John: Sundays in my house meant Magnum PI on a good day and Hart To Hart on a bad.

We used to watch the Black and White Minstral show, Love thy neighbour and all those other non PC shows or if we were really lucky Des O'Connor was on, Rodger Whittaker, Cilla Black arghhh no wonder I enjoy Fantasy now LOL

Vicky: I can remember Jim Davidson and his "Chalkie" jokes, Bernard Manning and a whole host of very racist comedians being allowed far too much telly time...

Perhaps mis will recall exploring an imaginary landscape, or rescuing a virtual damsel in distress. Computer games are getting so good. last the

Surely things like Thunderbirds, The Persuaders, Mission Impossible were all ITV? We were given full reign across the channels, and there were some gems. Last night I watched a documentary about Dave Allen...still an awesomely funny man....

Mark: true. They're getting very immersive too. We might get to the point when people are happy never to leave the house.

Nota Bene: I never took to Thunderbirds... though I seem to recall that Hong Kong Phooey was ITV... and that's enough to redeem them.

God you must love cable. All those 70's and 80's repeats on ITV3 and 4. In our household it was the other way around.

Never watched Corrie - it was common; Sunday night at the London Palladium just got through the censor - my mum - it was live theatre. No we stuck to being stuck up and after the TV warmed up and the valves started humming we watched the BBC til the national anthem and the disappearing dot.

Marginalia: and nowadays it's almost impossible to tell what channel you're watching unless you look at the icon in the top left corner.

We don't watch tv either - well.. I mean of course we DO, but we record things and it's very monitored. Currently, I'm taking our girl through series like The Famous Five (oh yeah!) and Family Ties. I don't like or agree with the stuff that's being produced now. Not to mention the awful ad's.

Ah we did watch some rubbish but it was memorable rubbish. In this Acorn Antiques musical I'm in at the moment, I have a line which refers to 3,2,1 and have to do the hand signal. But I have to do it wrong and end up giving the audience the middle finger. I imagine only a certain age range of audience will have any idea what it's all about.

Trish: the only justification for 3-2-1 that anyone will ever need!