Rat In Me Kitchen (And Me Bathroom) 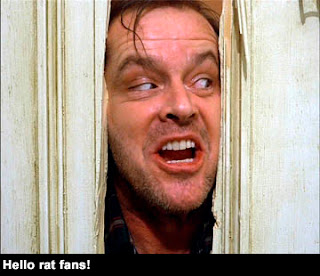 It started with rhythmic scratching.

Something sharp being clawed against wood and brickwork.

I was the only person to notice it at first and was hard placed to positively identify where it was coming from. Somewhere around the back of the kitchen cupboards possibly. I even attributed it to next door at one point (they’re students; I wouldn’t put it passed them to hollow out a cavity in the brickwork on their side of the house so that they could curl up into a ball and listen to their Radiohead albums in peace without the cruel world impinging upon their listening experience).

But then the scratching seemed to hone in and centre on the part of the wall that disguises a run of pipework from upstairs. When I say disguises I mean the pipe is quite obviously boxed in and as a consequence we have a bizarre buttress effect in the kitchen that goes all the way up to the bathroom and from there up into the loft.

For some reason, possibly because I was watching Spring Watch at the time, I thought it might be a trapped bird.

But trapped birds tend not to live very long and the scratching continued.

And then got higher. And higher. Until we could now hear it plainly in the bathroom. Something right behind the tiles, scratching at the grouting from the inside.

The cats got spooked. And then got interested. And now they watch that little patch of buttressed plaster and tile like it’s the telly. They’re just waiting for whatever it is to pop its head out of the splintered plaster like Jack Nicholson in The Shining. To be honest, even if it was actually Jack Nicholson my money would be on the cats.

And relieved. I think Jack Nicholson might be a worse pest to deal with.

My biggest fear is that the little blighter is attempting to gain entry to the loft. This would be bad news because we keep various family heirlooms and the boxes from my Lego collection up there. Did I say my collection? I meant, of course, my kid’s. Plenty of scope for rat mayhem.

I’m pretty sure all is secure but I haven’t yet ventured up there. But the time is nearing.

If you don’t hear from me for a while you’ll know it’s because “daddy’s home”.

English Rider: I bet the same has been said of Jack Nicholson.

Fancy breaking open the buttress and seeing that face peering out....

The fly in the web: I want a good shotgun in my hand first.

And what would a rat do to your Lego collection? Build a rat version of Toyland with Mr Ratty and Big Tail? Don't feed the cats until they regurgitate its head on your lap.

Gorilla Bananas: rats will eat anything and everything... I don't want chunks bitten out of my rare models. Starving the cats might indeed be an option.

Cover your soap - that's their FAVOURITE food! Cover all food as well. Once you remove their food source, rodents tend to bugger off.

Laura: the best part is we've got two compost heaps in the garden - loads of free food lying around for them! I shall have to stop buying Imperial Leather.

I did laugh when I read the word Lego

John: Lego, I'll have you know, is no laughing matter.

Maybe they are trying to piece together a house of their own from all the left over Lego bits.

Keith: what leftover Lego bits?! They're all spoken for!

We've had mice in our loft before and the scratching sounded as if it came from much bigger creatures. So it might just be Jerry rather than Roland?

Trish: if it's mice they really don't want to meet our cats; they'll literally eat them for breakfast. Well, the back legs at least. They tend to leave the rest on the kitchen floor for me to find.