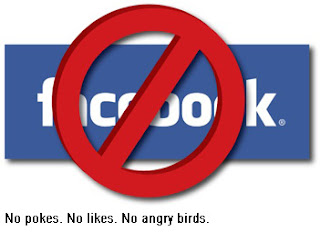 I'd sneer at it. Snarl at it. Use it sparingly, use it begrudgingly and know that I was being a hypocrite.

It seemed to embody the worst of social media: aggrandizing the trivial; making monoliths of minutia. It encouraged its users to market themselves as "social product" whose worth was tied into the value of their status.

Maybe though that was just me? Maybe I was only seeing the pretty lights on the surface; the Angry Birds, the Photoshopped pictures of celebs, the wool over my eyes?

Frequently when I log into Facebook now I am pleasantly surprised at how politicized it is. My updates are rife with international satire, news of causes, plights and global injustice. There are petitions. There is shared outrage. There is a sense of movement and speaking out. Of things not being allowed to be swept under the carpet. Illegal evictions in Kenya appear alongside stories of dodgy banking deals in the UK and the yet further developments of Operation Yewtree.

Facebook, like anything I suppose, can be as trivial or an meaningful as the individual makes it.

I can't believe I'm going to say this but, thanks to Facebook - or rather thanks to those who use it - I feel a little more world-aware than I have been for a long time. I'm not saying I'm suddenly an activist with a balaclava and a wine bottle filled with petrol... but that little bubble of my internet connection seems wider and a little more all-encompassing than it once was.

As clichéd as it is: I feel connected. Connected with people who are as dissatisfied as me.

On Facebook we snarl now at a politicians. Take our celebs to task. Castigate lazy and misinformed (and misinforming) journalists. Share the traumas of people in far away countries that we will never meet but whose trauma touches us. People are speaking out. Shouting. Demanding.

Maybe society isn't as degenerate as I feared?

Despite the appalling behaviour of our journalists the conclusions of the Leveson Enquiry are, nevertheless, a blow for freedom of speech. Yes, there need to be checks and balances but the press also needs a certain amount of freedom to pursue those in power who are doing us wrong. I worry that as the gags start to be applied, where will it end?

Social media - our voice - is already no longer as free and unfettered as it once was. People have got into legal trouble on Twitter and elsewhere.

How long before the censors start carving up what we can and can't satirize on Facebook? How long before they stop us sharing information, our stories, our opinions, our Photoshopped pictures of David Cameron morphed into Iggle-piggle?

Do we really want to go back to a blinkered life playing Angry Birds while the politicians and corporations stalk the streets outside armed with fire brands and petrol?

Facebook surprised me too...or is it just that the people we 'know' there are mentally active?

I wonder how long we will have a world wide web, too....

I'm glad that all you dissatisfied people can finally connect with each other, but don't expect too much in the way of satisfaction. Facebook can't solve all your problems. Who are the Angry Birds?

The fly in the web: I'm sure most western governments looked upon the Arab uprisings with a mixture of glee and naked fear...

Gorilla Bananas: years ago it was women's libbers now it's a game for kids.

I'm still sitting on the fence with Facebook - and twitter for that matter. On a good day, both seem to me to be to almost there - a kernel of a genius idea - but then on another, all I see is a visual form of CB radio. Maybe I'm just too old.

The bike shed: ten-four, this is the Bandit and I've got Smokey all over me...!

Oooooh where's the like button when you need it?

Being Me: bugger. I haven't got a poke button either.

They'll come for your blog first...

Rol: the resultant infamy would be a marketing benefit.

Gosh, everyone's writing about social media this week http://drewconclusions.blogspot.co.uk/2013/11/and-your-bird-can-sing.html
I'm conflicted about Facebook...99% of what's posted is a waste of electronic paper, but that other 1% is genius. Anyway, social media seems to encourage to be given free reign with their commentary...no matter how vicious and vindictive...that seems a problem to me

Nota Bene: there is a lot of trolling, I admit, but whether you see it or not on FB or Twitter depends on which people you allow access to your profile and which in turn you choose to access. Since being a little more selective I'm networking with a much higher class of internet person.

It's a funny one Facebook, there are posts on there that really do make you smile, laugh and think. And then there's the rest of the drivel. Maybe the key is to unfreinding a lot of drivelers...?

Not From Lapland: I got rid of a lot of deadwood a while back and now when I log into Facebook it's become a place of intelligence, wit and discernment. Now that's what I call social networking!

Facebook...mostly mind-numbing. It's also when you find out what level of attention span your "friends" have :)

Found out if I posted a photo or a few lines of text my popularity knew no bounds. If I linked to my blog...a deathly silence...even on the "like" front. The other plausible explanation is that my blog is crap. :)

Apart from all that I find it hell on earth to navigate...but that's maybe an age thing.

reservoirdugz.com: you got a point there. I post a funny or saucy pic and I'm Mr Popular. I point out I have a book to sell on Amazon and you can hear the tumbleweed.

Did I mention I have a book to sell on Amazon?