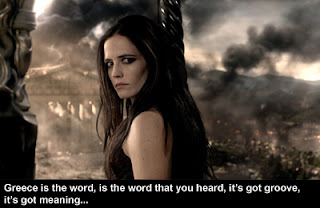 It grieves a man to confess his failures, his weaknesses.

Especially when those failures result not only in the deaths of hundreds of thousands but in the resultant non-existence of billions of billions more.

In my heart I am responsible for a mass genocide too heinous to contemplate. The snuffing out of an entire culture upon which most of the Western world has been founded. The pillars of democracy lie smashed and as dust at my sandaled feet. Philosophy and play writing have been set back millennia. Ray Harryhausen would have spent most of his adult life out of work.

But for a small quirk of fate (and reality) Greece – the classic Athens of ancient history – would have been utterly smashed and wiped from the face of the earth on my say so. Some of the more erudite historians among you are going to point out to me that pretty much happened anyway but don’t spoil a good anecdotal fantasy when I’m spinning one.

And we were. A tidal wave of CGI spatter patterns and arterial Jackson Pollocks cartwheeled and rooster-tailed across the screen in a ruby carnival of spear thrusts, sword flourishes and shield jabs. Limbs were liberated. Guts were eviscerated. Necks were relieved of gristly burdens.

Boats were rammed. Boobs were bared. Six packs were enhanced.

Fans of the original “300” won’t be disappointed by this sequel. It delivers and then some.

Sullivan Stapleton as Themistocles may not have the stature of Gerard Butler’s King Leonidas but he certainly manages the presence. His performance is an artful mix of machismo and convincing battlefield intelligence... enough that I was able to overlook the slight Australian twang of his accent. Lena Headey reprises her role as Queen Gorgo and it is nice to see her actually cutting her way through some of Xerxe’s black clad hordes rather than just looking coolly superior from afar but it is Eva Green as Artemisia who steals the show. Both visceral and yet weirdly supernatural she is by far the strongest character on the screen. A seething brunette maelstrom of contempt, bitterness and vengeance.

Her attempts to seduce Themistocles verge on the sadistic / masochistic. The violence is matched on both sides but it is Artemisia who inevitably ends up on top like a mocking Succubus.

And it is at that moment that I knew in the very depth of my soul that, had any of this been real and I had been Themistocles, I would have sold Greece down the river without a second thought. Thus proving that despite my pretensions to the contrary I am no high minded poet but a base animal of flesh and (non-CGI’d) blood.

This seething, thrusting review should convince the most hardened sceptic that this is finest cinematic hokum since Gone with the Wind. Farewell to history and hello to a French actress who can make a million dollars by simulating orgasms. I would have cast you as the eunuch who taught her how to breathe heavily.

Gorilla Bananas: and I, Gorilla Bananas, would have been glad to take your direction... provided you didn't want me to act "method".

Have you considered a cold bath?

The fly in the web: In ancient Greece? I'd be risking pneumonia with "luke warm".

I'm looking forward to seeing this...I enjoyed the original, even if I could relate any of the action to my 'A' level in Classical Civilization

I enjoyed this post. At least, I enjoyed the first half of it. Strangely, I don't remember much after "Boobs were bared". Sorry...

Nota Bene: if my history lessons had been like 300 I would have become a historian. Or a sex worker.

Martin: I didn't say they were female though, did I?

We've both used the word 'visceral' in our most recent blog posts. I don't know the significance of that but it pleased me.

Trish: we're just both very gutsy people. But unlike the characters in 300, we tend to keep our guts inside and only let them out through the medium of words.

I was going to wait for it to come out on dvd, or Netflix, but now I won't.

Marginalia: you won't go to watch it at all or you're going to the cinema this week?

Poor old Xerxes. Blood soaked chains in your nipple CGI gorefest or elegiac Handel Opera. Not much middle ground there. Not much day to day doing the washing up ordinary.

Keith: and yet in my mind's eye Artemesia is a right little scrubber...

Is that a football team or a menu item?