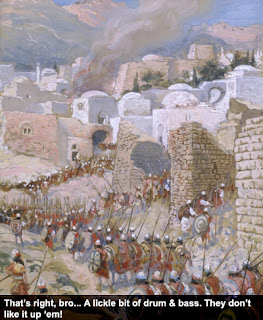 Noise has long been acknowledged as a weapon of war.

Apparently the American army has utilized a banging speaker system during many of its global gangster wars to pummel the resolve of its enemies by blasting out the best of Whitney Houston, Beyonce and probably Justin Bieber but amazingly not Edwin Starr which would make far more sense. And although I can see that a full-on Justin Bieber aural assault would have a fair chance of encouraging me to reach for my AK-47 just to perforate my own eardrums (I could do it with one bullet – I’m that good a shot) there is always the risk that, as with the Blitz spirit of the 1940s, it might have the opposite effect and harden my determination to remove America and all that it stands for, imperialistic capitalist pigs, from the map, from history and from the great god television itself forever and ever amen.

The first recorded use of noise in war (and I don’t mean in the context of a BBC special effects team strapping a C90 cassette recorder to a carrier pigeon during the Battle Of Britain) is probably the battle of Jericho in a long time ago BC when the Israelites conquered Canaan and decided to smite the city of Jericho by blowing their own trumpets once a day every day for 6 days and then 7 times on the 7th day climaxing with a great shout. It was undoubtedly one hell of a party that resulted in every man, woman, child and animal in the city being killed by the invading Israelite 24 hour party people.

That’s a lot of hummus going to waste and to my modern way of thinking the “complete death and destruction thing” seems a tad OTT. Did they even kill the snails and the butterflies? Geez! That’s damned scary and not a little bit pyscho. No wonder Dana International won the 1998 Eurovision Contest. Who would have dared vote against her?

So history is telling me that without a shadow of a doubt my next door neighbours are trying to kill me. Kill me and ethnically cleanse my family from the neighbourhood. And kill my cats.

Their last party a couple of weeks ago (which I have only just recovered from – and I wasn’t even there) lasted a bong shattering 24 hours. I’m not kidding. It went through the night – climaxing like the Israelites at around 4am when I couldn’t even hear myself attacking the partition wall with a cricket bat – and carried on at a lower volume throughout the morning and the afternoon before finally ending with a Euro-disco whimper in the early hours of the following evening. I’m guessing that by this point the students next door had consumed so many intoxicants they no longer had the necessary motor neurone skills to position the needle properly on their industrial warehouse-sized twin-decks. Or, as I’d much to prefer to think, they had suffered life threatening blood loss from their shattered tympanic membranes and had fallen into drug unassisted comas from which they never arose… Which might well account for how quiet it’s been since that ill-fated apocalyptic party night a couple of weeks ago.

I am, I admit, at a loss as to how to return fire. Their bombardments are not constant. They lack the discipline of the Israeli army to conduct a prolonged and consistent war of attrition. It’s almost as if they only launch their salvoes on special occasions. And they do send round an air raid warden to warn us beforehand to head for our Anderson Shelter in plenty of time.

They are very, very polite. Almost nice in fact. And I suspect at heart they are just like us.

But I want Canaan to be for the Canaanites.

Is that very un-PC of me?

Get a cockerel.
That'll ginger them up in the early hours of the morning...but do nip round and warn them first...

The fly in the web: have to say I don't think these boys would be at all put out by a cock fight first thing in the morning...

Thanks for that!
You bloody learn something new in blog land, when you don't expect it

John: I'm glad I've given somebody an education.

Perhaps put "Wing" on your stereo loud and bugger off for the weekend?

oh...and leave it on repeat while you're at it.

I think I understand why they do it - it's so they can't hear each themselves speak. How could they imagine they were cool funky dudes if the air were full of adolescent voices speaking in the comical twang of the English Midlands? Cutting off their electricity supply for 30 minutes would puncture their pretensions.

Amanda: had to Google Wing. I like the sound of her.

Gorilla Bananas: cutting off their oxygen supply would cure me of their pretensions for a lot longer.

Children playing is a true major annoyance to those without children. I'd maintain an air of happy family and encourage your boys to play as if their lives depended on it. But students mainly will be oblivious to you, your noise and the fact that their noise might affect you. If they are nice just mention to them that it was a bit OTT in terms of the length of time it went on for and in the future could they consider you sanity and perhaps give you a warning.

The US Army used (irony max) "Panama" by Van Halen to subdue Noriega holed up in his Prez Palace. I used similar tactics when I lived beneath a unseemly example of humanity who ran parties without fail every Thursday - Sunday. I blasted out Hendrix in retaliation but although it made me feel good for a short time it had no effect on the dense dastardly. It took delivering him a falcon punch to his grinning boat during a camel-straw-broken moment on his doorstep one early morning to bring about the end of his reign of terror.

I love Metal music but I'd never dream of sharing it with next door, always through headphones.
You have my sympathy in your hellish predicament but I don't recommend violence however I would phone the Polis. Fuck 'em

K Ville: they do give us warnings. The polite and civil way we've been conducting this is almost part of the problem and part of why I don't want to get mediaeval on their assess unless I have to.

Löst Jimmy: I must admit, in the dark early hours of their last debauchery various violent fantasies did run through my mind and punches to faces were the least of them. The only good thing is that I know the Uni term is now very close to finishing. May will never taste so sweet.

We hate our neighbours so much we're moving house. You have my sympathy.

Rol: fancy moving in nextdoor to us? Please? We're very quiet. And I quite like Morrissey.

get a pressure washer. Clean your car every sunday morning at 8am.

They can't live there forever can they? I mean students graduate at some point don't they???

Alex: I sincerely hope that May will see the back of them as they wend their way back to a very weary mater and pater.

Can't you get into their fusebox and cut off the electricity before one of their all-nighters?

Trish: a shotgun would be so much more eloquent.