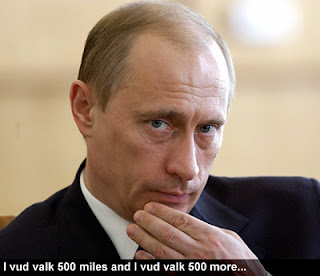 I don’t, I confess, have much in the way of political acumen so my grasp of the situation might be slightly awry but even I can see that the situation is at best tense and at worst explosive.

A country divided ideologically by the people who live there. One half wanting a split that defies geography, the other wanting to keep governance the way it is with a few tweaks for the better.

Foreign troops carrying out in-your-face manoeuvres on the sovereign soil of another nation; foreign soldiers right in the face of the native populace.

Centuries of bad feeling, grudges and old bloodshed threatening to bubble over into a whole new round of the same.

All the good – the partnership working, the shared achievements, the decades upon decades of neighbourliness which surely can’t all have been forced all of the time – on the brink of being swept away in a hysteria of media induced patriotism.

The politicians of the West giving forth disapproval and frowns, casting doubts on what is ostensibly a democratic process, voicing reservations about the abilities of the ordinary people on the street to know what it is they really want. David Cameron’s face is coming more and more to resemble the Lurpak butter man suffering from a bout of bowl bursting constipation.

But I can’t help thinking that it is really nothing to do with us or anybody else. Nothing at all.

If Scotland really wants to split from the Union and become part of Russia surely that’s their business?

Venice has also just voted to leave Italy...so it looks like Putin is going to have quite a widespread empire...

Bearded writers are always political - it's only the ones in England that pretend otherwise. It seems that Crimea was a part of Russia before that slaphead Khrushchev reassigned it to Ukraine. It didn't matter in those days because Ukraine was part of the Soviet Empire. Maybe you should be sent there to sort things out - beards are respected in that part of the world.

Gorilla Bananas: only if they're pointy and big enough to hide statistical piecharts of mass genocides.

Obarma could out smart Putin by offering to return Alaska - with Palin. Come to think of it Obarma could do worse than giving New Amsterdam back to the Dutch, California back to the Spanish, and Jack Lord and Hawaii to anyone who'd take it.

Marginalia: I can see Palin being a deal breaker for Putin. And as for Jack Lord, Putin would have to dig him up. Possibly choreographing his spadework to the famous theme tune.

And Catalonia wants to dump Spain...so Putin has somewhere nice to go for his holidays...

The fly in the web: geez, the Iron Curtain is spreading itself rather wide these days... I'm thinking if Westminster can't destroy the North of the UK by fracking maybe they can offer Putin a bogof deal?

I agree
I think given the history of the place
Leave well alone
Am I just being chicken?

John: I have long believed in the wisdom of chickens. Though cocks are a different matter.

Don't you just hate it when you come up with a witty comment only to find out someone else has used it first.

That Catalan comment was mine... damn you Fly in the Web! ;-)

Very Bored In Catalunya: as any decent despot will tell you, when it comes to land grabs you've got to get in early...

I read an interesting blog post from John Snow on the subject yesterday. Apparently Russia already had a substantial military presence in Crimea in terms of naval and army bases and the fear was the coup that deposed the incumbent regime which was very pro Russia, wouldn't be as pro Russia and they'd lose their presence in the area. Hence the move from Putin to effectively annex the area.

Have mixed feelings over it, not least because if it had happened earlier, they might have managed to put Richard Hammond in some Gulag somewhere.

Alex: I suspect the prospect of possibly ending up lumbered with Richard Hammond is what made them delay...