How To Look Good Naked 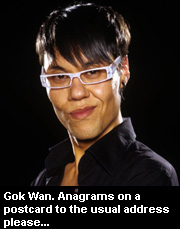 What the hell is going on with Channel 4?

Tuesday night’s have suddenly become bap-night. I actually lost count of the number of "hooters" (Gok’s terminology) that filled my TV screen with their curvy hypnotic looks on this week’s episode of How To Look Good Naked.

Gok Wan (his REAL name) is taking the pre 9 O’clock watershed by the scruff of its neck, ripping away its halter neck and exposing it’s sumptuously bouncing breasts to the whole wide world. What a guy!

In fact forget the 9 O’clock watershed: Tuesday nights barely tip over into 8 pm and Gok is bopping us with big boobs a-plenty... all in the name of fashion and reality TV you understand.

Despite the increased number of male viewers that the show is undoubtedly acquiring the whole premise is oddly un-titillating (no pun intended). There’s nothing salacious or unsavoury about Gok’s agenda. He seems a genuinely warm, caring, funny, intelligent guy and scores a major hit on the old gaydar. Maybe that’s part and parcel of how he gets away with it? From a female point of view he is completely unthreatening – his attentions are purely aesthetic as opposed to sexual – and ordinary women are falling all over themselves to celebrate their baptitiousness and get their jugs out on national TV. It’s bloody marvellous.

The best thing about Gok’s school of thought is that no surgery is needed or even endorsed. There are no fantastically expensive hairdos or make-up jobs. What Gok seems to genuinely want to celebrate is the natural beauty inherent in us all. Gok’s major gift is his innate ability to instil confidence in people – even those shy, wilting, wall-flowers among us who can barely look ourselves in the eye let alone anyone else. It’s a refreshingly compassionate feel-good approach and I have to confess to being a big Gok fan.

Gok’s a great guy and will undoubtedly move onto to bigger things.

Meanwhile I have sent my CV to Channel 4. I’m a hands-on kind of guy and I’m ready to take over the post of show compere as soon as he leaves...
Posted by Steve at Thursday, May 10, 2007
Email ThisBlogThis!Share to TwitterShare to FacebookShare to Pinterest
Labels: baps, baptitious, breasts, GokWan, HowToLookGoodNaked, television

Judging from your description, this seems to be a “top” show! It doesn’t really sound as though he needs to move on to “bigger things”!! I must try and remember next Tuesday to tune in, turn on and Gok Wan!!!

Indeed. Everybody should Gok Wan every now and then. It's good for the old blood pressure...

I love Gok, and would let him cast his knowing eye over my post pregnancy topography any day.....

Hmm. I'll see what I can arrange, Greenfingers... me and Gok, we're like that.

I think maybe it's about time that Gok did a How To Look Good Naked for men... Not sure about a nude photoshoot though!

What a great show. I think Gok is so talented. Has he got a website with tips and test results. Well done Channel 4.

Thanks for dropping by Guernsey Donkey (great name). I'm not sure if Gok has his own site but he does have a micro site on the Channel Four Web site: http://www.channel4.com/life/microsites/H/htlgn/gok.html.