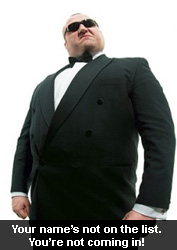 Very disappointing news from my friend, “Wilson”, who went along to the NEC in Birmingham to audition for The X Factor on Monday.

From what he’s reports he and the vast number of applicants were barely given a decent bite at the showbiz cherry.

After waiting nearly three hours for his slot Wilson was shoved into a tiny room no bigger than a portaloo where a very bored researcher sat on a chair composing a text message on his mobile phone. The researcher didn’t even look up or acknowledge Wilson’s presence. Luckily Wilson was prepared for this rudeness after hearing the accounts of his fellow X Factor hopefuls who’d auditioned before him... and it seems this ignorance and disrespect was generously ladled out to all applicants no matter what their standard. I suppose we ought to be thankful for this half hearted attempt at equality.

Wilson refused to sing until the guy looked up and made eye contact. Apparently the guy looked shocked that Wilson could actually sing properly but as soon as the piece was over he promptly waved his hand in dismissal and said, “Sorry, not this time.”

From what Wilson has learned this was par for the course for all of the applicants. All rather callous and offensive I’m sure you’ll agree.

Now before people start casting aspersions of “hard cheese” Wilson has made it clear to me that there were some amazing singers among the applicants – really terrific – but they were all treated in the same bored, offhand manner. The general consensus among applicants on the day was that a very definite pre-selection process was taking place in line with some sort of hidden agenda. Selection was taking place according to a rigid quota system based on who knows what kind of demographic. Your singing voice was not the deciding factor.

Anyway, Wilson is heartily cheesed off with the whole affair and I can certainly understand his chagrin. All that effort for nothing.

But, I personally think that just having the guts to go for the audition in the first place is quite an achievement and something to be proud of. I certainly couldn’t have done it. And it’s certainly a valuable experience too – albeit a rather crappy one.

Last time I spoke to Wilson he’d received offers from local bands to join them for jamming sessions and various people wanted CDs of his stuff. All promising opportunities, I’m sure you’ll agree, which I hope he’ll seize with both hands.

Who needs Simon Cowell and the approval of his ilk anyway?

Steve, I sent this to the SUN Newspaper when I discovered a little more about this really shite show:

copy of email 'THE FIX FACTOR'

Just been to The X Factor audition. It was a farce. Look at some of the posts at the links below - some from professional singers.

My experience is No.8 on here:

You could be an opera singer and be refused at these auditions. Really talented singers are being filtered out in isolated 1-to-1 auditions as so not to be heard by other auditionees when they're eliminated. THIS IS NOT A
TALENT SHOW and should be exposed. And what adds insult to injury is it's rumoured that most of the applicants that make it to the television are agency acts...

It sounds like a lot of people have had their feathers ruffled by the X Factor research team and it'll be interesting to see if the King Of Tabloidism gets to grips with the story...

Are you ready to be featured in a Sun centrespread X Factor scandal expose...?!

The irony about Simon Cowell and the other dickhead who manages Westdeath is that neither of them know the slightest thing about music! They set themselves up as knowledgeable but ultimately are both confidence tricksters. Most, if not all, of the music business is run on such a pretext. Even if your friend Wilson had got further, the opinions of the judges really aren't worth a jot.

You don't really need to be a good singer to be a successful pop star anyway. Imagine Bob Dylan shuffling up to appear on "The Z Fact-Less"! Cowell would show him the door, the ignorant bastard, were Bob to get that far, thus completely missing the point of one of the most influential pop singers of all-time!!!

About time too... nice to know our press people are so on the ball. Mind you, I suppose the story wouldn't have been considered newsworthy until the show was actually back on our TV screens.