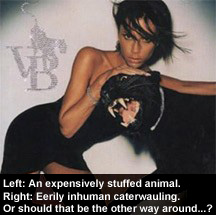 A “shock” ending to The F Word last night (though not that shocking really given the nature of the industry that Gordon Ramsay works in): one of Gordon’s young lambs was killed and half eaten.

So just an ordinary day at Chez Ramsay then...

Actually to be fair – and because I do actually like Mr Ramsay – poor Gordy was quite cut up about the ad hoc butchery that had befallen his beloved Charlotte (the Welsh bred lambs were named rather fittingly after Charlotte Church and Gavin Whatever-his-name-is-who-got-her-up-the-duff).

And to make matters worse Gordy’s sheep had been paddocked in the extensive and expensive grounds of Beckhingham Palace, the nouveau riche pseudo ancestral home of David Beckham and his clothes-hanger wifelet, Posh (formerly known as Spice).

Geez. If you can’t be safe in the grounds of Posh Towers where can you be?

The carcass (like Posh) was not a pretty sight – everything below the exposed ribcage (like Posh) seemed to have been stripped clean. It was odd to see someone who must be so used to chopping up cuts of meat turn almost green at the spectacle of a freshly eviscerated lamb. I guess context played a big part in it. Maybe if Charlotte had been shoved onto a sparkly white plate and garnished with a bit of parsley and mint Gordon would have been waxing lyrical about the "juicy freshness" and the "moist bloodiness" of the meat.

But maybe not so happy about the teeth marks that were plastered all over it...

Anyway, veterinary investigation didn’t rule out the possibility that Charlotte had been mauled by a “big cat”. Indeed this view was backed up by a big cat expert who just happened to be lying around Hertfordshire waiting for Gordon to call him.

Further investigation (i.e. talking to local people at the nearest watering hole) garnered loads of anecdotal evidence regarding Panther-like beasts slinking over the neighbouring fields and carrying off young bullocks and occupied people carriers in their slavering jaws... never to be seen again.

Personally, given the location of Gordy’s lambs, I can think of only one big cat malnourished enough to gobble up half a live sheep and then leave its carcass totally fleeced in the middle of a Hertfordshire field...

And that’s Posh herself.

Ouch - retract those claws!
Actually, reading the story I came to the same conclusion myself.

I strongly suspect Victoria would probably feel self-loathing at greedily devouring the lamb and then it would be fingers-down-the-throat time. I'm sure Heat magazine is preparing a 'Celebrities that savage farm animals' photo-spread as I type...

But, did Posh ever "sing", in the sense of actually opening her mouth in order to make a sound, or did she just stand there and pose and pout her lips in front of the camera?

She has expressed fear over actually having to hold a microphone again and "sing" two new songs for the Spice Girls greatest hits album, just as I've expressed my fear over exactly the same issue!

Indeed... a nightmare for us all!

Funny you should mention Charlotte Church...I'd lost track of her for a few years and was shocked to read that she was pregnant. She's still like 13 in my mind. yikes