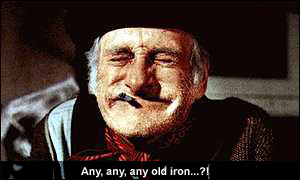 Karen and I availed ourselves of a traditional English street service over the weekend – the good old Rag N Bone man.

After the removal of our palatial greenhouse a couple of weeks ago the garden was left with a few metallic stragglers whose rusty loitering was beginning to make the garden look extremely untidy. Swift action was called for... and it came fleet of foot on a white charger just like in the days of old.

Well. Maybe not exactly like the days of old. Today’s modern Rag N Bone man no longer employs a magnificent dray horse to pull his cart or even wields a mighty wheelbarrow with which to collect household junk. Instead our particular Rag N Bone man turned up with a huge white flatbed truck with which he merrily transported various shelving units, two old broken hoovers and a vast array of assorted mystery metal work back to his yard or wherever it is that he deposits all his hard gotten gains.

He did however have a magnificent horn (please, ladies and gentleman, please!) which sounded his approach from at least two whole blocks away. Once he entered the mouth of our street we could clearly hear the carefully enunciated call of “Ragun Bow! Ra-Bow!” and knew that our saviour was near.

The garden now looks a hell of a lot tidier but there’s still loads of work left to do... weeding, pruning, removing an old water butt....

And the water butt is going to be a job and a half. Turning on the tap to empty the damn thing I was dismayed to see nothing but a pathetic trickle dribbling out onto the path rather than the expected rush of water akin to a damn bursting.

At the current rate it’s going to take 2 weeks before the ruddy thing is empty.

Peering inside the butt I was horrified to see a thick brown soup stodgily glooping up its innards with a surface skin thick enough to land a Cherokee helicopter upon. Administrations with a space merely brought various unwholesome looking bubbles up to the surface... and a slight sense of resistance near the bottom indicated that there was something softly organic submerged somewhere in the depths of the water...

I wasn’t brave enough to find out exactly what.

Oh my gosh - that organic 'thing' sent shivers down my spine....

My guess is a drowned rat or something similarly rodent like and hideous.

We're hoping to install a water butt soon, but this has made me think twice!

Water butts are fine as long as they have a cover on the top - the one we inherited with the house didn't; hence all the assorted alien matter that is currently suspended within its watery bowels... Jelly anyone?

Never heard of rag & bones... it sounds quaint, along the lines of 'Mr Bojangles' (I've heard John Denver's song, but am still unclear on the concept he's singing of)...

Same here. I'm familiar with the songs but now that I come to think about it I have absolutely no idea what it is he's actually singing about. Maybe someone else could enlighten us? Or not as the case may be...!

Uuuugh!! Yes I wonder what could be festering away down there. Admit it Steve, you killed Beverley Craven didn't you and tried to dispose of the evidence...it's all coming back to haunt you now.

Incidentally, please can you send your Rag and Bone man to South London? We have a broken microwave sitting in our front garden which the bin men refuse to take away (spot the pun). It's rather unsightly...

Yes. I admit it! I killed Beverley Craven and the murder weapon is stashed (rather aptly) in the butt... a very brutal looking marrow. She deserved it. She insulted the length of my green bean...

Ha ha ha!! And now the spectre of Bev is coming back to stalk you...rising, dripping from the well...WATCH OUT!!