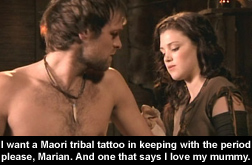 Amazingly, the anachronism count in last night’s Robin Hood episode reached an all time record low – which is good, people, very good indeed. Because it meant that the realism score actually went up a notch or two. And that’s a veritable first. For a few seconds I even wondered if I was watching the right show.

For once we didn’t have ye olde Mediaeval Ninja Surfing Turtles or ye olde wooden iPod’s blighting the mis en scene (see, I even know the lingo) instead we had a story about poison and revenge… or even the poison of revenge… with the result that Harry Lloyd who plays Will Scarlett actually had the opportunity to act his little Gap socks off.

Somehow I don’t think they’re going to go for it though.

For one thing the death count in Robin Hood is always unfeasibly low. Perhaps ridiculously so. Hence the panto feel of the show. And for another I doubt the Robin Hood costume department would be able to confine themselves to the materials of the period and we’d have Marian grinding around in PVC, black leather and cut away trousers with chaps.

Hmm. Maybe I ought to write another letter to the BBC?

Anyway the only thing that grated about last night’s episode was the unpalatably large dollop of cheese that descended on proceedings right at the end. To commemorate their murdered dad the Scarlett boys came up with some awful looking tree carving with holes in the middle of it. Very Henry Moore I must say. And when ye olde evening sun did cast its life giving rays through the holes – lo! A face of light did appear upon yonder forest cliff face that looked more like Richard Whiteley than Will’s dad – but who am I to question the boy’s parentage?

But now for the most amazing bit of all... The trailer for next week’s episode!

I’m 99.9% sure it’s her and from what I can surmise she appears to be playing the part of a witch and gets to experience the ducking stool at some point. Hmm. Now there’s a fantasy that I never thought of indulging… Anyway, given my previous post where I waxed lyrical about Josie’s televisual fate and bemoaned the fact that she’s not on our tellies nearly enough these days I can only assume that the gods of television were benevolently tuning in and in their infinite wisdom decided to answer my prayers…

Forsooth, I have never watched a single episodes of the new Robin Hood. Ye gads!

Anyway, you've been TAGGED, Stevenage...see my blog for further info...

Forsooth I am inspired to say precisely nothing about this show -must be the lack of chaps in pointy PVC bras to inspire me, if not the storyline...

OC, once I've caught up with my overflowing in-box I'll get right onto it!

Laura, thanks for dropping by anyway (as always) and for casting your impeccable hat into the ring... even if the twang of sheep's gut against willow doesn't inspire you...!

Good one Steve. An overflowing box can be a severe disadvantage...

It depends entirely on what it is overflowing with...!