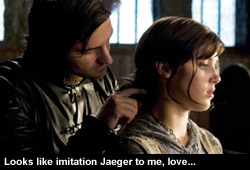 Yes, while South Africa were trouncing England 15 – 6 in Paris (well really, what did you expect?) I was watching Robin Hood trounce Guy Of Gisbourne in Loxley. Not a Loxley that the people of the time would have recognized of course – not with the manor house done up like Henry VIII’s pantry – but an approximation of Loxley nonetheless. At least that what the show’s annoying titles tell us anyway…

A change of location and the name whooshes across the bottom of the screen accompanied by the sound of a launched arrow. Twang, whoosh, thud. I’m just waiting for someone to have their eye taken out by “Loxley” or eviscerated by “Nottingham Castle”. Now that would be a show.

Talking of having your eye taken out… in this week’s show Marian was daringly sporting a rather uplifting pea-green corset which she quite brazenly wore around Nottingham Market while she tried to draw as little attention to herself as possible in order that she could enjoy a secret tryst with Robin Hood. I suppose it’s like the old joke of the naked female bank robber – no one got a good look at her face…

Hilarity of the night (aside from the Rugby score) was Gisbourne staggering about in an impenetrable suit of armour that looked like it had been made on Blue Peter out of some old cereal boxes and a Tesco blue stripe roll of tin foil. Apparently it was supposed to be Damascus Steel – an early example of, well, steel actually, and having Googled it, it does appear that for once the show’s writers managed to put down their mochaccinos long enough to do a bit of genuine research. If only the costume department had been up to the job of actually making it look like real steel. I mean how difficult could that be?

Anyway amid much gurning from Keith Allen’s Sheriff, Robin dealt with the armour-clad Gisbourne easily enough: a liberal application of pitch and a flaming arrow somewhere in the groin area. Sadly it bounced off Gisbourne’s Sheffield Steel (well, he is Northern…) but not before the flames had ignited the pitch and turned Gisbourne into the Wicker Man.

Cue a quick dive into a handy watering trough which the good villagers of Loxley happened to have standing by. It was well steamy.

I find the titles on "Heroes" annoying, too, telling the viewer who is in the next scene and their location as if, after however many episodes we are into the series, we're unable to remember the story from week to week!

I know what you mean, they're more than a little patronizing though I think they're a result of style rather than an attempt to supply the viewer with unnecessary information!

Steve, you could present the alternative version, showing viweres how they can still find hidden 'nuggets' in the mechanically recovered 'meat' reconstituted television that is doled out to them/all of us today!

The episode about Youth television on Saturday night was particularly interesting when a group of teenagers dissected an episode of Hollyoaks before opining that actually they preferred The Two Ronnies and Porridge!

Perhaps there is hope for them after all.

I'm resisting the urge to read your older blogs on this, last night we watched the programme where the Nightwatchman gets stabbed by Sir Guy. Its a two-parter and even tho' obviously the olde gal pulls through I'm interested to see how they do it. So to speak.

Hi Laura, I haven't seen that show at all though you've definitely piqued my interest! I've only ever seen snippets of Hollyoaks and decided very quickly that it was televisual candy floss - harmless, oddly sweet and sets your teeth on edge if you have too much of it. Porridge is definitely superior: nice to know they had some idea of what true quality is. Not sure about The Two Ronnies though - I always think there's something deeply unsavoury about Ronnie Corbett...

Hi Amanda, I remember that episode well! Actually the two-parter you're now watching represents the best two episodes of the first series and I recall giving them quite favourable reviews (tongue still firmly in cheek, of course)! I won't spoil the ending for you though! ;-)

At least us ladies got to see Richard Armitage with his top off...

Hey many thanks for stopping by Per.pri - and thanks for the link. I'll make a point of stopping over at your blog very soon! :-)

I forgot to watch it again. But I didn't watch the rugby either, so I have that in my defence.

You have a whole lot more in your defence than the England team did...