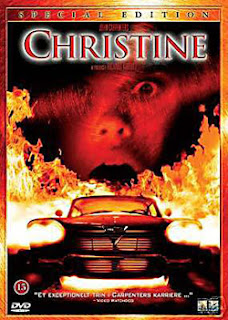 As a rule we don’t name our vehicles in my household. They merely get referred to as “the car” or “the bike”. After all it is impossible to get them confused so why bother being more personal?

“The car”, however, has now earnt the moniker “Christine”.

Yes, as in the film.

Karen, the kids and I were on holiday last week. We had lot of plans to visit people and places. To see the country. To travel. The weather was set to be good. Things were looking up. We just had to get the car through the MOT.

Christine decided to malfunction the day before the MOT. A big overheating problem. However, we managed to limp her to the Peugeot garage for her MOT.

They rang back fairly quickly. The head gasket had “gone”. I don’t know where it had gone, ‘cos it was there last time we looked, but it had gone.

Annoyingly, if the car had fully broken down amid smoke and bits of spewed metal, my wife would have called out the AA who, bound by the terms of the insurance agreement my wife has with them, would have replaced the head gasket and carried out all repairs at no cost to us.

But because the damn thing hadn’t the grace to breakdown properly and we’d got it to the garage we were now liable for all repairs.

Although I wasn’t there, Christine’s headlights glowed evilly red as the garage hit us with their quote to do the work.

That’s a serious dent in our savings. In the end, after much deliberation – might it be worth just buying a new car? – we decided to get other quotes and go for a repair. We just can’t afford to tie up thousands of pounds in a new car until Tom is at school and Karen is working full-time again.

So we found another garage. A reputable, well recommended one. He could do the job for £900. Only thing is he couldn’t start until the penultimate day of our holiday and we wouldn’t have the car back until the day we were all due to return to work / school.

We had no option. So all our travel plans were scuppered. No visiting of friends. No drives around the country. Christine sat on our drive exuding brimstone from her exhaust and revving her engine in praise of Satan for much of our holiday week until we finally offloaded her onto the mechanic last Thursday.

We should have got her back on Monday but the repair took longer. Something about a fan blade shearing off and taking out the radiator grills. I’m guessing she was trying to snuff out one of the grease monkeys who were working on her...

So Karen, who needs the car to get to and from work, had to ring her employers to say she couldn’t make it in. This meant taking an unpaid day off. That’s us £50 down already before we even pay the garage.

We finally got the car back yesterday afternoon (so another day off unpaid for Karen) but... and here’s the rub. The car now has to be re-MOT’d. The mechanic can’t do that. We have to take her elsewhere. That’s a third day at home for my wife. We are now £150 down this month on top of the repair bill.

Christine meanwhile was writing “666 in clover” in engine oil all over the floor of the mechanic’s garage and buggering a virgin over the pile of tyres the mechanic keeps at the back of his repair bay.

Today the position is this: we’ve managed to get her into another garage today for an emergency post-repair MOT at midday. Should she pass we’re all sorted and only a grand down. If not then we will be throwing more money after bad...

Did I say bad? Harrumph. I’m calling a priest. That car needs some serious exorcising.

bloody hell steve! i feel you pain, that's a huge wack of money! Here's hoping the exorcism works and you dont have to pay off too many ex-virgins to keep quiet.

Is there a mysterious swarm of flies inside too, when you open the door? If the priest vommies on sight of her..... RUN.

Heather: I'm amazed she found any virgins in Leamington Spa to be honest...! ;-)

Being Me: her headlamps have a tendency to spin through 360 degrees when her gears are crunched... that's not a good sign, is it?

Very Bored in Catalunya: passed with flying colours - just heard. I think a little drop of Holy Water in the radiator did the trick...!

Gappy: ours seems to eat money and then shit out blood, sweat and tears...

Yikes! What a nightmare that your plans were ruined. At least it wasn't your fault unlike me putting disel in instead of petrol DOH!
Here's hoping your week improves.

Suzanne: little chance of an improvement I'm afraid: just been nobbled for the best part of £300 for a new digital TV Aerial and booster box plus I've got a gas fire repairman booked out for Friday afternoon. I'm working for less than nothing this month!

Oh, that's just horrible!
When car manufacturers put out bumf about the technical aspects of their cars they should also be obliged to put a warning about how much dosh it's going to cost you by going wrong just when it's needed.

The fly in the web: if they did that the motorcar industry would cease to exist over night.

Just read all the previous replies in case there was breaking news about the MOT. It's that soddius lawius thing again - always when one can least afford it does fate throw the rubbish at us in spades. What a shame all your plans were scuppered like this.

Changing the subject for a mo - as a man with two blogs I need to pick your brains. When I comment on other people's blogs how can I now be my new blog name of frenchfancymovestokent and not French Fancy? Or, if having to stay as French Fancy as that is my Google account - how can the comment I leave link back to the new blog. Sorry to use you as Blogger help, but they couldn't!

p.s. - just realised that everyone's 'comment name' takes the looker to the profile page, not the specific blog, so please ignore my plea for knowledge (although, if you have some spare knowledge about anything in particular, please pipe it direct into my brain)

Good luck with the MOT

FF: how very remiss of me! Good news on the MOT - passed. We have the car back home and it's good, literally, to go.

As for your questions: changing your name I would think would require some editing of your profile which you can do from your blogger dashboard. Any comments you leave normally link back to your profile as opposed to your blog so I'm not sure how you can change that. Sorry. I feel like a blogging IT failure now!

FF: your P.S. obviously crossed with my previous comment! Seems I wasn't a complete failure then! ;-)

I feel your pain. Cars are things of wonder, until they aren't.

And the helplessness that a breakdown brings, as you stare into the engine and the mechanic could be reciting Babylonic cuniform for all the understanding you have.

I actually managed to lose my radiator cap a few years ago, and, in order to get it to the garage, I taped a marmite jar lid onto it. What shred of respect they had for me evaporated in a yeasty, but nutritious cloud that day. So be thankful you still have your social standing intact. Even if you would rather have had the £1000.

Keith: the innate whore in me would sell my social standing for £500 and a Yorkie bar let alone £1000.

You make me SO glad I gave up driving and took up buses.

I haven't been able to get beyond your amazing insurance coverage.

Yep motor vehicles are bloody expensive. I went in one time for service and $2K later we got it back, oh on SO's birthday LOL

I'm confused. I thought you didn't drive. You should all go on holiday on your bike next time.

Fran: I misread your comment and thought you said "gave up drinking"...!

English Rider: the AA are cool. Pity the car didn't give us a chance to use them.

Rol: I don't drive. My wife does and works about 12 miles away from home - hence needs the car to get to work and back again in time to pick the kids up from school / nursery. Buses and trains are too unreliable and we can't afford a taxi every day. The bike would take far too long, believe me...

She is evil and must be destroyed...but not quite yet. Fingers crossed for you...

Nota Bene: she's purring like a good 'un this morning. Hopefully the exorcism ritual worked and she's now back on the side of the righteous...

I'm really sorry to read about your car problems, you have my sympathies. I've been there in the past. Your Christine comparison is a good one except it renewed itself for free, well upon killing...I don't think that comes with any current warranty I know of

LöstJimmy: not even Esure? I'm sure Michael Winner could sort something out for me...

So Steve are you going to hang a string of garlic from the mirror, you know instead of the fluffy dice?

Vegemitevix: now that's not a bad idea. Might need to beef up the air con though...

It sucks, sorry can't be more eloquent it just sucks all of, the car, the holiday, the money your wife's days off... sucks.

MissBehaving: it was the king of the big suckeroo and then some. However, the car is now back and purring like a fishmonger's cat. I may even have finally got a plumber sorted out. Things could be looking up!

Bleeding hell Steve! £1800! That's what you get for buying a French car, you know they can't be trusted. The head went on our Landrover Discovery a couple of months ago after the CH drove it back from London with no water in it (and they say women are useless!) and it only cost us £300. Did they give you a solid gold head or what?