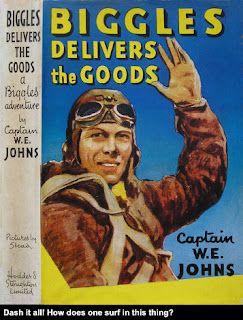 I haven't got a Kindle Fire HD. Yet.

I've just got a normal one. One that lets me buy, download and read electronic books.

But, I confess, the tech-head gadget-addict in me (that daily I virtually fight to repress) yearns for the ability to watch movies, play games, surf and read electronic books all at the same time. In colour. In High Definition. I mean, who wouldn't? At the end of the day this is how computers are going. A single highly mobile device that takes care of all your conceivable entertainment needs in a slim-line package small enough to be taken absolutely anywhere that you could possibly want to go on the entire planet.

The world is almost at the point where we can all have a captive genie in a bottle for under £300.

Just give it's eager screen a rub and magic things start to happen.

But just like a genie that magic is now going to have a conscience and an opinion and instructional advice and a role that is going to impinge on your world in a manner quite unexpected.

I'm sure you've all heard about the new Mayday button that is one of the new features on the Kindle Fire HD?

If not, the premise is basically this: you need help with your Kindle? You can't be bothered to read the electronic manual? You want your Kindle to do something but you're not sure if it is actually capable of doing it and you're not sure what search term to type into Google?

Just hit the Mayday button. And you will then be able to talk for free - in real time - with a Kindle operator / expert / customer service guru (in apparently less than 9 seconds) who will then converse with you via video chat and tell you what to do to achieve your goal.

Am I the only person who is already thinking up ways of how this service could be subverted and abused? I can't be the only malicious joker on the planet, surely?

I'm sure the Mayday service has checks and rules and ways to limit misuse but even so...

You're telling me that they're not going to get regular calls from customers who are just lonely and want someone to talk to? "Er... yeah, hi. My name's Josh and, er... well. Is it OK to talk to you about stuff? I know you're busy but I really like you. I don't really fit in with my friends, you see? They say I'm different. Do you like Goth music?"

Let alone the teenagers and drunk idiots who are going to call the Mayday service from the pub or a phone box and demand to be told the colour of the operators knickers. Or worse. The dweebs that mistake the Kindle service operator (deliberately) for a web chat girl. "Hey baby, do you take Paypal?"

And what about all the psychos out there? The ones who are going to call at 4am in the morning and stare into the Kindle screen for about 10 minutes without speaking a single word while the Kindle operator erroneously tries to instruct them on how to change the microphone and speaker settings on their Kindle before the late night caller finally makes the following threat-laden statement: "I know where you work. I can reach you at any time."

My own personal favourite is going to be the hypochondriacs. The ones who will abandon Dr Google in droves for the chance of talking to a captive live expert who is as unqualified as a GP as they are. "Excuse me, I know this is a bit unorthodox, right, but I live alone and I can't quite angle the mirror properly. Could you take a look for me? I think I have a growth of some kind coming out of my ass. If I hold the Kindle steady could you take a screen shot and then email it back to me? Thanks."

Yeah. I'm definitely going to do that one.

Either that or I'm going to hire a Biggles costumes from the local party shop and pretend to talk into a flight mask as my imaginary airplane ditches into the cold North Atlantic... "Mayday! Mayday! I'm going to have the ditch the old girl into the drink! Bloody hun has shot me up from behind! Mayday! Mayday! Aaargh!".

Honestly. I bet they'll never ever get tired hearing that one. Ever.

So. How long do you think the Mayday service will last before they either close it down completely or start charging a premium rate for it (and then they really will start accepting Paypal)?

Just hit the Mayday button at the top of the page and let me know.

The operator will say "our conversation is being recorded for training purposes", which would deflate the bravado of 95% of pranksters. The hardcore element could be dealt with by a jolt of electricity to the Kindle, so you might end up with a singed beard.

Could I hit the Mayday button to ask whether gnat realy has pubes - maybe there will be an initial auto-divert to http://lmgtfy.com/?q=does+a+gnat+have+pubes

K Ville: quite naturally it will depend on their age and whether they have developed a sudden and appalling taste in music and a mistaken concept of their own self importance.

Don't worry Steve, no one will ever accuse you of being a grown-up or taking life too seriously. I bet they'll find a link to that Snoopy and The Red Baron song and blast you out of the ether. At the very least you'll have it as an earworm.

English Rider: I'm very tickled at the thought of someone accusing me of being a grown-up. Should it ever happen I'll let you know. As for Snoopy, I have to confess to being a genuine Peanuts fan... but I always liked Snoopy's Joe Cool rather than his Red Baron combatant.

Really quite surprised at your lack of faith in the human race. I can't believe anyone would even think about abusing this service.... My one question for them is 'How do I pay my corporation tax?'It may be one they don't quite know the answer to....

Nota Bene: not sure the operators will be allowed to use expletives... but I'm sure their answer will be very interesting.

I would feel very tempted to abuse the service....but no doubt the one with a mayday button will not work, just like the useless piece of plastic I have at the moment....

I'm rubbing but nothin's popped up yet...

The fly in the web: you're probably right but the thought of owning a "book" with it's own built-in complaints desk amuses me greatly.

Trish: you may have to vary the strokes dependent on the age of the model you own.

I don't even have a bog-standard kindle - just a house crammed with dusty books.

But the May-Day button is a fine idea. Perhaps they could fix my tumble dryer while they were at it.

Gappy: a washing machine with a Mayday button...? Now that would be a genuine selling point.

I still have no desire for a Kindle. Of any kind and report Amazon for abusive messages every time they email me a kindle ad. I have well and truly reached electronic saturation point. I want real life back.

Laura: should I ever purchase a Kindle HD I shall press the Mayday button in your honour and report that my Kindle appears to have an infestation of bookwork and ask what they suggest to deal with it.