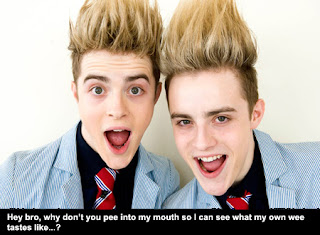 100% true: in a recent episode of Jedward's Big Adventure on CBBC the following dialogue took place between the Jedward monkeys:

Jedward 2: "Oh yeah? Well the sun ain't even out today 'cos it's too cloudy!"

It's saying something when even my 6 year old son turns to me and proclaims, "Word up, pater, but I swear to God the British Broadcasting Corporation is dumbing down kid's television."

And it got me to thinking that perhaps the Jedward twins are like a viral idiocy genome that is slowly spreading across the UK via HD cable signals, deliberately targeting and infecting our kids and corrupting their synapses so that in a mere generation's time George W Bush will be seen via the readjusted lens of History as a politician of Einsteinian proportions. The Jedwards are a virus. A virus with the big-eyed baby seal look of a stranded three-legged puppy dog and the asexual physiognomy of a Ken Barbie doll. They appear to be so harmless we just don't bother to defend ourselves. They are the perfect storm.

The only effective vaccine is a potentially lethal dose of cynicism. It's either cure society or kill yourself. Compared to the alternative that has to be a win-win.

Preamble over, onto the main thrust of this post. What if the Jedward virus started to manifest itself in other entertainment settings? Movies and the like?

Imagine The Twilight Saga (and I accept I may have lost most of my readership right here) with Bella Swan perpetually mooning over Jedward Cullen and his inability to consummate their relationship. I say "inability" not "refusal" out of some half-assed outdated Christian belief system where having sex out of wedlock leads to eternal damnation (and the production of children whose innocent state is revered in Christianity as a virtue worth emulating). No. The Jedwards can't have sex because (a) they are not sexually mature enough (both physically and mentally) and (b) they can't stay focused long enough to maintain even a half-mast erection.

Jedward 1: "Oh Bella, you make me feel all tingly down below, girlfriend."

Jedward 2: "Ooh I just love joke monster gloves. Let's go get some! We could play a joke on Bella and pretend we're wolves or something and then pounce on her in the forest and really screw with her already questionable emotional state..."

Or what about Jedward Scissorhands: our poor Jedward twins are artificially created in a weird Walt Disney Frankenstein experiment out in the American sticks but their creator dies before he can finish making their hands (and their brains). So our hapless boys fashion hands for themselves out of scissors and knives and other equipment they find lying around in a gentleman's barbershop and become known as Jedward Scissorhands. Unfortunately they are so stupid they can't even get jobs as letter-openers in a Home For Paraplegics and so starve to death because I really don't want to mess with my fragile psyche by thinking up a happy ending for them.

Or finally ('cos I'm already scraping the barrel here) they morph into a weird living dichotomy of Edward Woodward and become Jedward Woodward, The Equalizer. They decided to live a life helping the little people (you and me, as opposed to Leprechauns) and with that in mind put an advert in the local paper: "Odds against you? Need help? Call the Equalizer. 212 555 4200". Only the newspaper they put the advert in is The Bet and they soon find themselves receiving death threats from all the irate gamblers who have lost fortunes based on the boys' sage advice to bet against "the sun rising tomorrow 'cos it's just too damned cloudy."

Thank you for listening.

For a minute there you had me thinking you were suggesting a mash up between the cheeky chappies and the HBO Classic western DEADWOOD.

Now that I would pay to see.

Keith: Ian McShane would eat them alive. That would be one hell of a TV show!

Those tufty hairstyles would make them ineligible for any roles other than props.

Our eldest (almost 7) has recently started watching this tripe. Maybe it's the after pub glow talking but I think it's okay. Let me explain my thinking. CBBC. The little bugger might be watching toss- literally the walking talking embodiment of male ejaculate- but it's advert free. That means he's not watching a programme that in itself is an actual advert for some toy, interspersed with 30% actual adverts for actual toys.

That's not to say it isn't crapulance, because it is, it's just crapulance that doesn't encourage him to harass me for toys. A sort of lose/win really...

Gorilla Bananas: I already own all the toilet brushes a man could want; I'm not in the market for two more.

Alex: oh you poor misguided fool, you. Just wait till he asks you for this: Jedward face mask. Or worse two - one for him and one for you. See how long that after pub glow lasts then.

The hangover has already made me want to smash Jedward's faces in. Have left him watching Fantastic Four: Rise of the Silver Surfer instead.

Alex: a much better alternative. Though I wouldn't want to dissuade from excessive acts of violence directed at Jedward.

Don't see what all the bother's about. Who are these "Jedwards" anyway. CBBC is that some spin off from the NSA?

Congratulations to your 6 year old for stringing together "British Broadcasting Corporation". He should go far.

Bella Swan and the Twilight Saga - is that on one of those cable channels I keep hearing about. Sounds to me it has too much adult content.

Edward Woodward now you're talking. Have a vague memory of a black and white TV show in the '60's with Lonely. "You're never alone with a Strand."

Clever you mashin' up Woodward and Edward.

Have you put your six year old down for Eton or Westminster?

Marginalia: Gordonstoun actually. I want him hobnobbing with the right kind of bully.