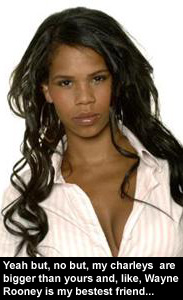 It’s just not grabbing me. Not at all,

God knows I’m not a fan of Big Brother but I admit I enjoy the debate and outrage that it usually inspires in the nation. Whether it’s a worthwhile bona fide social experiment or not is not important. I just think it does the nation good to analyse itself occasionally and pull a few skeletons out of the wardrobe for a good airing. The Shilpa-gate racism row last year was a case in point.

This year though I feel a big fat nothing.

And that’s fat as opposed to phat.

Sure, Charley is getting on everybody’s Charley’s with her constant motor-mouthed bitching and her “I’m all that” ghetto-ho posturing... but compared to other years it barely registers a 1.5 on the old BB Controversy Metre. She’s a D-list wannabe. Her sights are set so low they barely protrude above the shag-pile. Who gives a stuff?

I do find her “famous people are my friends” stance hilariously funny though. No Charley, these people – these footballers – are not your friends. They don’t come to your house or ring you up. You stalk them. You throw yourself at them. You hover, you simper and you hope against hope that your jiggling boobies get you noticed. Personally, I’d find a pair of shin-pads infinitely more interesting to look at...

Even the arrival of Ziggy has done little to up the excitement factor. Ironically, if the BB bosses were hoping to put a pigeon among the cats what they actually got was an indolent, surprisingly socially astute lion who’s incessant urbanity seems to smooth the waves around him rather than crank them up to force 10. He’s like oil on water. Slick. Too slick.

What we need is someone to strike the match.

And worst of all there’s nobody in the house that I unreservedly like. There’s nobody to pitch for or come out fighting for. I really don’t care a brass farthing about any of them.

Either BB is growing stale or I’m growing old.

But. There is hope. As people have pointed out to me, it’s early days yet. The cat fur might yet be flying before the series grinds itself to a lip-glossed halt.

I just hope I can stay awake for that long.
Posted by Steve at Tuesday, June 05, 2007
Email ThisBlogThis!Share to TwitterShare to FacebookShare to Pinterest
Labels: BigBrother, celebritybigbrother, Shilpa, television

I love the way Ziggy, on entering the house, was described as a music producer. If he knows anything about music then I'm a plastic surgeon. Who wants to be my first patient? Charley?? No amount of enlargement or reduction could help this gurl in any way whatsoever! They forgot to tell her, it's all about yer personality!!

"Ziggy played guitar,
Screwed down eyes
And screwed down hairdo,
Like some cat from Japan,
He could lick 'em by smiling..."

I don't think BB's been that bad - give it a chance - it's early days! There was a fair injection of drama last night although admittedly of the hilariously trivial variety - scrapping over a pair of hair straighteners!? Give me strength! But then what do you expect when you put a load of women together (I'm probably going to die for saying that now).

It's true Ziggy hasn't caused that many waves - yet - although last night was pretty funny with the women attempting to pull off his swimming trunks!!

Apparently the next male due to enter the house is an 18 year old bitchy gay male - so hopefully that will cause fireworks...

You're right. I need to learn Zen-like patience. the storm will come...