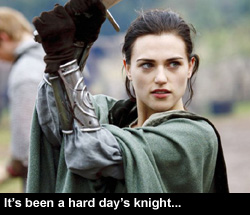 So with the return of Merlin to our TV screens last Saturday (apologies to my overseas readers) I find myself dusting off my TV critic’s visor and lance and preparing to saddle up the steed I call “please Radio Times employ me as a columnist”.

The first two series of Merlin were good. They were OK. They were ample. They were entertaining. Compared to the BBC’s ill thought out, misbegotten Robin Hood, they were brilliant. But compared to other stuff the BBC was churning out (Lark Rise To Candleford, Ashes To Ashes to name but 2) the writing was patchy. A good episode was frequently followed by one which merely made me shrug my shoulders and toss my gauntlets down in exasperated ennui. Only the searing brunetteness of Katie McGrath’s Morgana kept my interest constant.

After only one episode it’s impossible to say whether the writer’s of this third series have finally found their legs but they certainly left the starting blocks with enough acceleration to leave Roadrunner spitting out tarmac.

Finally the story is moving. The pieces are beginning to fall into their allotted places. Morgana has turned to the dark side. No more riding around on a palfrey mare looking like a representative of the Scottish Widows (although actually she did do that in this episode); no more haughty looks above a décolletage that I would love to drop my wand into (though, er, she did do a couple of those as well) and no more simpering smiles to Arthur and Uther as if she were accepting an invitation to cream tea at The Berkeley (though, yes, there were some of those but they were all part of her evil plan to lull them into a false state of security).

The dynamic has changed. Old allegiances are broken. The whole social dynamic of the show has been injected with a newer, darker energy. The interaction between the characters is now far more interesting. It’s gone from Enid Blyton jolly japes to C.S Lewis good vs. evil mysticism. There is betrayal and sneering looks afoot. There is righteousness and corruption. This is all much more in-keeping with the Arthurian legend and gives the actors something to really get their teeth into.

For the girls Bradley James (Arthur) spends much of his screen time either swishing his sword or his nipples around in manly topless abandon and Colin Morgan (Merlin) somehow manages to muffle and mangle his muscular Irish accent out of all existence and into a generic English plum with such skill and verve that you completely overlook the fact his ears totally eclipse the light of the sun. How the lighting riggers manage to backlight him without making his head resemble Shrek’s, I don’t know.

For us guys Angel Coulby plays Guinevere as if Thomas Mallory had re-written Cinderella but is wenchy enough to be modern, sassy and, dare I say it, chav-like but all in a positive way (I’d just love her to say to Arthur “yo bruv, it’s well shameful but like I love you, innit”) but for me, the real star is Katie McGrath. Poised, graceful, long limbed, brunette and able to wield a plunging neckline as expertly as she wields a blade. She can pull my sword from its stone anytime.

The producers have found some money too. I suspect the wagon load of groats that was delivered to their gatehouse with a note from the BBC executive team that read “’ere, give us a third series and make it look like Clash of the Titans” had a lot to do with it but I am not complaining. Last night we had giant scorpions, fighting skeletons (almost as good as the ones Ray Harryhausen produced for Sinbad) and a flying dragon. And for once none of it looked too ropy. Hopefully this is a sign the BBC are in for the long haul and we might actually get to see Arthur crowned king rather than have the Beeb pull the plug just as it all starts to come good.

So, all things considered, I will be flying the flag for Camelot every Saturday evening for the next 13 weeks though secretly supporting the dark side just ‘cos the bad girls are hotter than the good ones. And whilst in that vein, Katie McGrath you have the honour of receiving this blog’s second TV Totty Of The Week award for services rendered to corsetry and witchcraft.

Just bung it on the mantelpiece next to your grimoire, luv; it’ll look magic.

Great review! I missed the first episode, grrr, but I hear it's on iPlayer so I'll be watching that soon (before Saturday, of course). Im pleased to hear it's even better--I was worried it was going to go from patches of ho-hum to completely dull.

Michelloui: definitely worth catching on iPlayer. If they keep up the standard of this first episode we'll be in for a cracker of a series!

Steve, what can I say? You have a way with words which means what I previously would never had considered watching, I will now HAVE to.

If for no other reason than to see what the object of your fetish is all about.

LCM: now that's praise indeed! Maybe the BBC ought to pay me on a retainer...?

I'm sure this review will have the Radio Times on the phone in no time.

Very Bored in Catalunya: no doubt speaking to their lawyers...! ;-)

Oh Steve you are wasted in that Council job - brilliant review!
Yup I enjoyed Merlin too and am very happy to see Arthur swishing anything about :)
Roll on Saturday for the next episode...

I thought it was just me with a minority interest post today - incidentally I deleted my first attempt so your remark has gone with it.

As for Merlin - I watched a bit of the previous series but just couldn't take anything with Richard Wilson in it very seriously. I just keep remembering his famous catchphrase and it ruins it for me.

Annie: I've been saying that for years but no-one will believe me!

FF: I don't believe it! I see what you mean. You have to learn to block that mental soundbite out from your mind...!

Crumbs - thanks to A Modern Military Mum I was able to read this fab post & record the repeat! Can't go missing Merlin!!

Well, you've guessed already that we don't have that here in Aust. (yet, anyway). To be honest, you lost me at Arthur swishing his nipples. After that, you could've said anything because for some reason, I started thinking of Jon Hamm (Don Draper, from Mad Men) and how he might look swishing... oh, never mind, you don't need to hear this.

Being Me: hmm. Plainly there is a market for nipple swishing males... maybe I need to start up some kind of agency?

"a décolletage that I would love to drop my wand into" ...."She can pull my sword from its stone anytime" ..... I have never seen such filth in the Radio Times !! However, I have never read such a fab review in there either - although I found that I was a bit put out by your enthusiasm for Ms McGrath! My daughter and I love Merlin, well more we LOVE Arthur Bradley. The feelings I have when I watch him handle his sword so expertly are not not not appropriate for a woman of my age, but I just can't help myself !!

Selina: ah but would you like to help yourself?! Funnily enough my wife thinks he is quite tasty as Arthur too but curiously is less so when he appears in interviews as himself... whereas I am less fickle about Ms McGrath though I must confess I have a thing for long mediaeval dresses, long hair and big hooded cloaks. I'm sure she looks just as good in jeans and slingbacks though!

LöstJimmy: is a corset the finest invention in all the world? Corset is!

What a great review and what a pain we missed it on Sunday! My Miss Ten loves Merlin, and I'm happy to indulge her by watching with her. I mean there's man nipples and everything! x

Vegemitevix: man nipples but no lady nipples. I may have to write to the BBC to complain about that. Purely in the interests of equality, of course.

Never seen the show but I'm all for swishing man nipples. Based on your brilliant review, I might just have to check it out.

Organic Motherhood with Cool Whip: you're too kind. Hopefully you'll get swishing man nipples a-plenty and not the swishing ears of Merlin...

I have a sneaking suspicion the BBC may have already cancelled "Merlin" without telling anyone though I hope I'm wrong.

With no increase in the licence fee, leading to a funding shortfall, and "Doctor Who" partly occupying the "Merlin" slot, next year, it looks as though cost cutting will slay the magic.

TimeWarden: seriously? I do hope you're wrong. What Merlin has in its favour though is a huge overseas following; it's shipped out to an amzing number of other countries who all love it. The Beeb would be mad to cut the show.

swishing nipples? I'm not sure how that's done (and feel compelled to go stand in front of the mirror giving it a go) but I'd watch it just to find out.

I'd give you a job at Radio Times, especially if you could phrases like nipple swishing in there.

Heather: if I've done nothing but encourage more nipple swishing then the post will have been worth it; do let me know how you got on. As for the Radio Times, if ever they give me a job I hereby promise to use the phrase "nipple swishing" at the earliest appropriate opportunity. ;-)