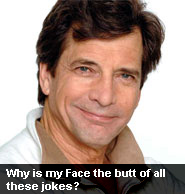 Have they learnt nothing from Jade’s eviction?

My God – just how thick can these people be?

It seems that we as a race always need someone to pick upon, victimize and bully. It’s a distasteful need to admit to but if Big Brother truly is a reflection of society then the proof is plainly there to see.

No sooner is Jade ousted from the BB house and the bullying of Shilpa dies down than the housemates choose a new target and a whole new round of bullying begins. This time the victim is Dirk Benedict. Phew – well at least there isn’t a racist angle this time, eh folks?

I’m not even sure quite why it started. Dirk flirted quite harmlessly with Shilpa – all taken in good fun and lasting little more than a couple of minutes – and suddenly Cleo Rocos is dressed up as a tart and is literally hounding Dirk all over the house pretending to leer and paw at him. Poor Dirk was trying to sleep on the sofa when it first started – hassling nobody. Even when Dirk made it plain he’d had enough still Cleo continued, her whole stance quite aggressive. I’m very very disappointed in her. It seems that she has a nasty side too.

As far as Cleo was concerned she was teaching Dirk a lesson – if he can give it out he ought to be able to take it too.

Excuse me?! Who appointed Cleo – or anyone else for that matter – the arbiter of public morals in the BB house? What right has anyone got to “teach” another person “a lesson”? What arrogance!

My own theory is that Cleo fancies Dirk and is feeling rejected by his attention to Shilpa. After all, it was Dirk’s flirting with Shilpa which seemed to kick all this off. Shilpa however was fine about it – no one needed to teach Dirk a lesson on her behalf. If anything Shilpa was rallying around to support Dirk – trying desperately to deflect Cleo’s attention away from him and later sitting with Dirk in the garden to make sure he was ok.

Worse was to come though – the giggling, school girl bullies, Jo and Danielle, proving that they’ve learnt absolutely nothing from Jade’s eviction, were back guffawing into their pillows and making snidey comments with Cleo in the bedroom while Dirk tried to sleep later that night. Here we go all over a-bloody-gain.

I don’t know about anyone else – but this constant bullying (it happens EVERY BB series) is starting to leave a permanently nasty taste in my mouth. Are we really that malicious and spiteful as a species?

BB and my own life experience suggests that maybe we are. I’ve even witnessed similar bullying occur in the office where I work. Seemingly it’s commonplace.