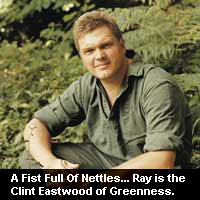 As a precursor to our Big Brother viewing last night Karen and I rather appropriately watched Ray Mears’ Wild Food on BBC2. We love Ray in our house. He seems to engender all that is warm and friendly and knobbly-kneed about Great British eccentrics. There is also the sneaking suspicion that as the world continues to go tits up with global warming and runaway pollution Ray’s teachings could one day become the basis for Western humanity’s survival on this beleaguered planet.

However despite Ray’s cheery smile and easy laughter I can’t help sensing an isolation about him. I guess it comes with the territory. Ray is “out there” some how. Detached. Separate. Mostly by choice I’d imagine given his penchant for going walkabout in the wilds with only his haversack for company. So is he a wandering mystic or just a weird anorak? You tell me?

One telling fact emerged on last night’s show however. Describing how to make string from the stem of a nettle plant Ray said he’d made the discovery whilst playing with nettles as a small boy.

Hmm. Despite his enviable survival knowledge, one can’t help thinking that perhaps Ray was a bit of a strange child with no friends and distant parents... such an upbringing would certainly have made me want to fashion harpoons out of deer antlers and willow branches, I can tell you.
Posted by Steve at Thursday, January 18, 2007
Email ThisBlogThis!Share to TwitterShare to FacebookShare to Pinterest
Labels: bushman, RayMears, survival, wildfood

Ray's partner died a while back and I think this is his first series since her death. It makes his "seperatness" and distance more poignant. Very sad indeed.

I had no idea. That IS sad. Thank you for the update. It just makes me admire Ray's strength of character even more. Top bloke.