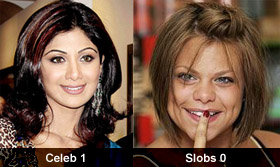 I have to confess to feeling completely lacklustre this morning... Monday morning syndrome strikes again.

Nevertheless I feel it incumbent on me to comment upon the Celebrity Big Brother final that played out on the TV before the nation’s jaundiced eyes last night.

The only real surprise was Dirk scoring higher than Ian. Personally I really liked Dirk’s irascibility and his grouchiness. Obviously I must empathise in some way and share those same qualities myself (my wife is nodding)... though I’d prefer to think the affinity lies elsewhere, i.e. in my ability to adopt any disguise at whim and to construct tanks with exocet missile launchers out of old mopeds, washing up liquid bottles and dusty boxes of junk that people leave lying about in their garages. That and an Oedipal need to suck on a fat cigar like it was a woman’s teat.

Anyway, it was no surprise that Shilpa won and though part of me initially felt it was evidence of cynical manoeuvring on Channel 4’s part I nevertheless must admit that Shilpa was a worthy winner. Truly graceful, magnanimous and dignified as well as willing to put aside any hint of sourness and bad feeling. Though I’m sure the latter was out of an understandable desire to put as much distance between herself and the foul memory of Jade Goodey as humanly possible. It may be that once she’s had time to consider the full picture she’ll feel justifiably furious at her treatment by Jade, Jo and Danielle. Certainly it was heart rending to see how upset she got when confronted with a potted account of all that those three witches had done. Too much for the poor girl to take in, I suspect, though she needed to see it.

Cynicism aside, at the end of the day Shilpa’s victory at least gave out all the right signals about what the UK really stands for at its best...

As for its worst, I have to confess I enjoyed Danielle and Jack’s discomfort immensely. Bravo to Channel 4 for confronting them with the full impact of all they’d subjected Shilpa to. How they squirmed. I have to say though that, like Jade, at least Danielle accepted the wrongness of her actions immediately and looked genuinely ashamed. I still can’t get over the fact that Jo refused to accept her part in it during her exit interview on Friday. That will go badly against her, I’m sure.

I really hope that the careers of all three are in tatters. I wish I had the capacity for forgiveness and clemency that Jermaine and Shilpa so admirably exhibit but alas I don’t. So tough.

Am I glad that it’s all over? You bet.

Although it created much meat for many a good blog Karen and I are both of the opinion that it’s nice to have our viewing choices freed up once more. BB is rather a jealous god so it’s always nice when it’s hold on the nation loosens... in fact even last night we were Channel hopping to the Beeb to catch Richard Hammond’s very welcome return to Top Gear after his near fatal car crash late last year. It was good to see and the show was good-humouredly laced with loads of manly emotion and the kind of awkward, stiff-upper-lipped love that only exists between "real men". Ah what joy to behold.

I really felt sorry for shilpa when she was shown what Jade,Jo and Danielle had said about her,she was visibly shaken.Jade and Danielle at least said sorry for what they did but it appeared to be beneath Jo to apologise for her awful behaviour.Not a nice girl!