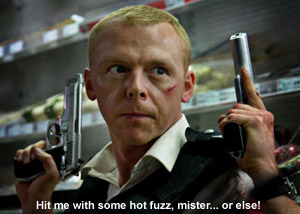 As it was Karen’s 40th yesterday I treated her to a day of gifts and choice entertainments which comprised of a massive stack of DVDs, a whopping tower of fab books, a breathtaking example of local jewellery craftsmanship, a hefty slap-up meal at The Saxon Mill and – the icing on the cake – a first class paradigm of this country’s top movie produce in the shape of Simon Pegg’s Hot Fuzz.

Fans of Spaced will love Hot Fuzz. It was certainly good to see “Marsha” (Julia Deakin) on the big screen though this time playing a propurrrr Somerset barmaid. Nick Frost was on form as the bumbling, Point Break obsessed Danny Butterman and the rest of the cast were all superb: Timothy Dalton, Jim Broadbent, Edward Woodward to name but a few. All top UK actors who all apparently queued up to appear in the film. And it’s easy to see why – the sheer enjoyment on each of their faces can be read from the first scene. Somehow I don’t think filming Hot Fuzz was at all a chore. Why can’t I get a job like that?

Anyway, I won’t spoil the plot too much. Basically Simon Pegg plays Nicholas Angel (or Nicolarse as his moustachioed CID colleagues call him), a top, high flying London super cop who just can’t switch off from the job. Nick Frost plays PC Butterman a low lying, cake scoffing, beer quaffing Somerset cop who doesn’t know how to switch his police radio on but can operate a DVD player whilst blind drunk. Pair the two of them together in a town where the gristly murder rate rises in line with the gags and you have a fantastically entertaining movie.

And look out for Shameless actor, David Threlfall (Frank Gallagher), who makes a hilarious appearance playing an annoyingly poncy Shakespearian actor who receives one hell of an eloquent performance review...

Heck. I’m gushing but this is the film to see if you want to combat the February blues. I’m already pre-ordering it on Amazon; it’s that good.
Posted by Steve at Wednesday, February 21, 2007
Email ThisBlogThis!Share to TwitterShare to FacebookShare to Pinterest
Labels: HotFuzz, Karen, NickFrost, SimonPegg

After what you had said in your previous post about Life on Mars I watched it for the first time last night. Absolutely brilliant, I am sorry I missed the first series.

Always happy to make a new convert! I'm really pleased you enjoyed it, Aly. I thought last night's episode was nicely handled in terms of how they portrayed the endemic racism of the period and Gene Hunt's underplayed emotion in light of his boss's corruption.

It's definitely worth getting the first series on DVD to fill in the gaps!

Regarding Simon Pegg, it's a case of local boy done good as his parents live just three miles up the road.

Some have criticised "Hot Fuzz" as being too long, at exactly two hours, but it looks like good fun from the clips I've seen. I'm a fan of Tim Dalton, especially his first outing as Bond, and fondly remember David Threlfall as Tory MP Leslie Titmuss in "Paradise Postponed" long before he decided to experience how the other half live in "Shameless"!

I must admit it didn't feel like 2 hours at all - which can only be an endorsement. I felt the film was nicely paced and didn't flag at all. People really need to get passed this "90 minute movie" malarkey!

I'll probably wait for it to come out on DVD before seeing it. I thought "Shaun of the Dead" was good but not brilliant - I imagine this is similar. Still glad to hear you enjoyed it, Steve. At least we're doing British comedy a lot better these days - all of those Four Weddings type rom coms bored the pants off me and were so predictable.

"Spaced" was also brilliant and I liked Simon Pegg in "The Long Game", one of the Christopher Eccleston Dr Who stories (he's a birrova fan of the show, you know!)

I could make a rude comment about the title "Hot Fuzz" but I won't.

And what a generous partner you are to your lady!! Lucky her!!