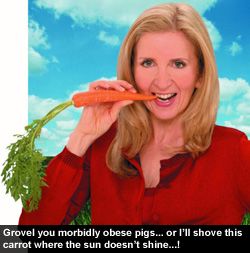 How can such a tiny, decrepit, bag of bones be so humongously scary?

Ok I’m being unfair here; I know that health food dictator, Gillian McKeith, has bounced back to health from a very serious illness to embrace the nuts-and vitamins perfect-poo lifestyle that she so brutally advocates on her TV programme, You Are What You Eat, but for all that she bullies her fat clients with demonic Caledonian energy I can’t help thinking that there is something extremely unhealthy about Gillian’s general pallor and demeanour. Is she really any healthier than the morbidly obese size-0-wannabes that she regularly tortures with her celery and spinach smoothies? She certainly doesn’t look it.

But what really disturbs me about The McKeith is the contemptuous, harsh attitude with which she treats all her "patients". She’s a bully. She’s absolutely vile to people whose self-respect and self-image is already at an all time low. Her dietary techniques seem to centre around unpalatable food combos, daily poo inspections and ritual public humiliation. I am not exaggerating.

Gillian never seems to be satisfied unless each week she has made her clients, both male and female, cry with guilt, heave with disgust at their own bodily produce and gag with horror at their regular weekly food intake.

I realize that this is the traditional shock tactic approach. Gillian is basing her whole modus operandi on old school army training techniques: totally demolish the soldier’s current belief system and then rebuild him/her anew with a whole brand new ethos. And certainly it seems to work.

But does the end ever justify the means?

She made one poor woman climb into a bath of cold processed food sludge in order to illustrate the kind of crap she was subjecting the inside of her body to. Dubious in itself but Gillian made the sobbing woman do it in the front garden of her London home – with curious passersby peering over the wrought iron fence – thus publicising the poor woman’s distress. That is just not on. For all Gillian is undoubtedly motivated by worthy ambitions – a real fire to save people from themselves – she nevertheless doesn’t give a fig (syrup of) for their emotional well-being or their feelings. Gillian seems to have a very machine-like approach to people. I’d go as far to say she’s a nutritional mechanic rather than a healthy lifestyle guru. As long as people are physically fixed what does it matter if Gillian has messed their minds up in the process?

Of course, these people subject themselves to Gillian’s regime willingly so maybe that’s all the justification that Gillian needs? These people are in extremis and I’m sure in some cases it literally is do or die. Such endeavours always make compelling but uncomfortable viewing.

I know what you mean, there is something very scary and uncompromising about Ms McKeith. Perhaps she should don leather chaps and a whip, as she certainly does have S & M tendencies. And the fact that she's so obsessed with poo is...worrying. The phrase "Scat Queen" surely springs to mind.

As you say she employs shock tactics to get results and I guess her justification for employing all these harsh methods is that it's the only way to get through to some of those desperately overweight people. But she can be very inhumane and OTT in her approach.

And I too agree - she doesn't actually look that good. Her face has a stretched and sinewy look and I think she's bordering on anorexic.

She's the size of a doll too - positively tiny. In this week's episode she got into a sleeping bag that was so small it looked like she was climbing into a pencil case!

Are you jealous of Gillian's perfect poo? :o)

Not at all PerfectPoo - I regularly produce a pert no. 4 (as measured by Gillian's Perfect Poo Chart.