Care For A Dickie Biscuit? 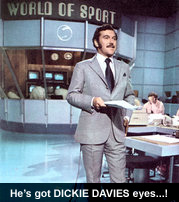 I have never liked football. I find the whole ethos of the game overblown, pompous and ineffably down-at-heel (ho ho). But I guess it gives those poor kids at school who are only good at woodwork and smoking behind the bike sheds some sort of career opportunity when they leave. God I’m such a snob.

My distaste actually has its source in a childhood where Saturdays were forever locked into a good morning / bad afternoon dichotomy. Basically Saturday mornings were a joyous occasion for me and my sisters: Tiswas and Swap Shop kept us happily occupied for hours and took us right up to lunchtime. And then at 12.30 the televisual circus closed up its big top and was replaced with the dreaded World Of Sport.

Oh how I hated Dickie Davies and his weird badger striped quiff. And I can remember Dickie before his hair even developed that white streak. Ah the horror of advancing old age!

Anyway, my dad would just lock the TV solidly onto World Of Sport for the entire afternoon. Football, rugby, swimming, golf, more football, boxing, wrestling, more football, tobogganing, skiing, motor cross and even more football. And then we’d have to suffer that interminable half hour of the football results being read out at the very end by a bloke who sounded like he had a red hot poker shoved up his backside.

On and on forever. And even after World Of Sport had finished there was worse to come. The Grumbleweeds. Russ Abbot’s Madhouse. And then the spawn of Beelzebub: 3-2-1 with Ted bleedin’ Rogers. Aaaargh! God TV was crap in the late seventies and early eighties.

Anyway the whole point of this blog is to ask the salient question: what the hell happened to Dickie Davies? It’s a question that’s been preying on my mind for oooh at least 2 minutes.

The last Dickie Davies media reference that I can recall was by Half Man Half Biscuit in the mid eighties with their glorious musical paean to the sporting maestro - Dickie Davies Eyes (she’s got).

Is he dead? Is he chained up in a madhouse somewhere (with or without Russ Abbot)? Or is he lurking in the wings waiting for the first opportunity to eff up all my Saturday afternoons once more?
Posted by Steve at Wednesday, February 28, 2007
Email ThisBlogThis!Share to TwitterShare to FacebookShare to Pinterest
Labels: BBC, DickieDavies, football, LifeOnMars, SwapShop, TISWAS, WorldOfSport

I don't know about Dickie Davies (and there's a double entendre name, if ever I heard one) but I am totally with you on the disliking football thing. Maybe that's because I'm gay, in which case it's a bloody joy to hear a heterosexual man saying he hates it!

And I am SO with you on the Saturday morning thing, Steve. Like you I got very upset when Swap Shop closed up and an afternoon of boring sport beckoned. TV hell.

And I rememeber having to endure the football results too! With that naff telex machine thing. Of course it was just about worth enduring that because Dr Who usually came on afterwards - an oasis in a cultural desert.

I found this on Wikipedia, not much but a little info:
http://en.wikipedia.org/wiki/Dickie_Davies

I wonder how they filled up the hour on BBC4 which is meant to immediately follow on with the next episode of "Life on Mars"?

You were on the wrong channel! Now, if your dad had been a fan of "Grandstand", you would've at least caught some of the earlier "Doctor Who" episodes instead of Dusty Bin!! But wasn't Bond girl Caroline Munro on "3-2-1"?!!

Hi Old Cheeser, I have to say that I totally loathe football. I hated it playing it and I certainly hate having to watch it. Even the World Cup gets my goat. The only sport I actively enjoyed playing as a kid was badminton, mainly because I was pretty good at it!

Yes I think you're right, Timewarden - it was indeed Caroline Munro but alas my juvenile hormones weren't yet advanced enough to take consolation from her presence alongside Ted Roger's maniacally twirling digits...

Good for you Steve, football sucks!! (Okay I don't have any objections to men in shorts, provided they've got good legs and are semi-attractive. Michael Owen is very do-able. But that's another story and you don't want me clogging up your blog with my sordid fantasies). Funnily enough I liked badminton too.

I disagree with you about 'The Grumbleweeds' and 'Russ Abbott's Madhouse'. I found them a good laugh, perfect Saturday night viewing. Much better than the dross we have now such as Ant & Dec and 'X Factor'. Tastes differ, I suppose.

When you put it like that, Zokko, part of me thinks you're right. The Grumbleweeds were certainly better than Ant & Dec!