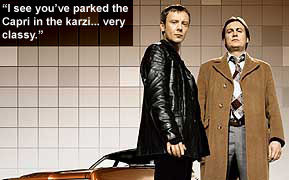 The best drama on the Beeb in years, Life On Mars, returned last night for its second and final series. Karen and I have spent the last few weeks waiting with baited breath (sad I know). Would it match the standards of excellence set by the first series? Would it exceed them? Or would it stutter, stumble and fall?

We needn’t have worried.

Gene Hunt was straight in there shoving nosey journo’s out of the way like they were cheap bags of spuds, his camel hair coat as unmoving as his adherence to good old fashioned 1970’s chauvinism. Sam Tyler – superbly played by John Simm – carries the bizarre premise of the whole show with such unflinching conviction that his continued presence in 1973 - despite frequent phone calls from 2007 - seems perfectly acceptable and totally normal.

The show doesn’t so much as persuade you to suspend your disbelief as entirely convince you to believe in the outlandish. And you find yourself doing it with nothing but sheer unadulterated pleasure.

John Simm (Sam Tyler) and Philip Glenister (Gene Hunt) are one of the best acting combos ever. It’ll be a sad day indeed when the series finishes after this last final run but I can fully respect the decision to draw the show to a close while it’s so far ahead.

Is Sam mad? Is he in a coma? Is he imagining it all? Anyone who can imagine the gravely moralled Gene Hunt, the velvet voiced WPC Annie Cartright and 1970’s Manchester down to every last Wagon Wheel and Alvin Stardust album has got to be on the wrong side of sanity somewhere along the line... but the ride Sam Tyler is taking us on is such good fun who really cares?

Like I said: best drama on the Beeb in bloody years.
Posted by Steve at Wednesday, February 14, 2007
Email ThisBlogThis!Share to TwitterShare to FacebookShare to Pinterest
Labels: AnnieCartright, BBC, GeneHunt, LifeOnMars, PhilipGlenister, SamTyler, television

I actually watched it for the first time ever, the other night (I'd never seen any of the first series but had heard rave things about it). I enjoyed it on the whole, very akin to a 1970s cop show - well naturally. And all the phone call stuff was creepy, I hope it all gets explained/sorted properly at the end of the series!! As an old cheeser I loved all the 70s styleee too.

Being a major Dr Who fan I've also been interested in all the recent stories seemingly confirming that John Simm has been cast to play the Master, the Dr's arch-nemesis. Not sure what he'd be like in the role, time, as they say, will tell...

John Simm is certainly an interesting choice. His acting credentials are superb so I'm looking forward to it. Will the show survive without Billie Piper though? That's the big question!

Yes, I'm sure it will survive without Mistress Piper! She was a mere companion! Although she was good. I'm waiting to see if new assistant Freema Agyeman will measure up...