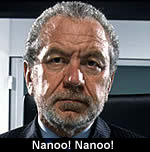 There is a definite grey motif going on at Amstrad Mansions or wherever it is that the Holy Sugared One bases himself. Sir Al seems to be covered in a fine down of grey hair that I’m sure covers his entire face. Does he employ a topiary expert to shave his head into the inimitable Alan Sugar shape that we all know and... well, not exactly love but instantly recognize?

My own personal theory is that aliens are ruling the Amstrad roost. The greys have landed. Sir Alan is some kind of genetically modified gooseberry and rather appropriately sits between the two greyest people on the entire planet: Margaret Mountford and Nick Hewer. Surely these people are automatons controlled by remote signals emitted from the depths of some Amstrad computer shaped spacecraft in secret orbit around our primitive little world?

There is something dead eyed and emotionally void about them both. Every last drop of personality has been leeched out of them. Maybe Sir Alan regularly sups this heady brew to keep himself so vital and young looking...?

Great. First aliens and now vampiric qualities to boot. You can see why The Apprentice keeps me hooked can’t you?

Anyway, Mr Grey and his two plaster-board sidekicks rule the booted and suited combatants with great aplomb and the programme is a great demonstration of business psychology and competitive human interaction at work. There is something incredibly satisfying about watching all these smug, arrogant, super confident scheisters continually falling flat onto their own faces and displaying their immense business ineptitude... thus proving that despite their 6 figure salaries they really are no better than the rest of us grubbing about in the mud to acquire a paltry 5 figures on our payslips.

I pity Sir Al having to choose one of them to be his next apprentice, I really do.

He’d be much better off employing that bloated little dwarf they found at Roswell...
Posted by Steve at Thursday, April 19, 2007
Email ThisBlogThis!Share to TwitterShare to FacebookShare to Pinterest
Labels: AlanSugar, aliens, grey, Karen, television, TheApprentice

The protons and neutrons that Sir Candyman so easily dismissed are more of the "real world" than the arbitrary pricing policies that are at the centre of all business.

I've always believed that conducting business is a euphemism for legalised thieving which to most people is probably an oxymoron!

Too right - how else can you describe a process whereby products are routinely and deliberatley sold at prices well in excess of their actual material value? And yet we all willingly collude in this process. Looked at in the cold light of day, capitalism really sucks. And then add to it the fact that it has majorly contributed towards climate change and you have a marketing nightmare in every sense of the word!

You're absolutely right. We do all willingly collude in the process of buying and selling, even if reluctant to do so, and that's a really frightening thought. It suggests the majority of us have no will of our own or that it's simply easier to accept the status quo.

Brainwashing or resignation or a bit of both? Interestingly, those are the very concepts that were at the heart of the "Gridlock" episode of "Doctor Who", last Saturday, which partly explains why I enjoyed that one more than some as I believe you did too!