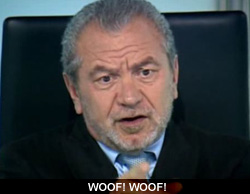 Karen and I guffawed ourselves silly watching The Apprentice last night. What a sorry-arsed bunch of booted-and-suited halfwits, scheisters and ego-blown grifters the latest bunch of Amstrad job applicants are. I wouldn’t employ any of them to clean my toilet let alone give them a 6 figure salary to boost Alan Sugar’s bloated bank account.

The task last night was a real stinker. The teams had to design and market some kind of doggy essential that the UK’s millions of dog owners would go absolutely barking for – so much so they’d happily part with the £29.99 asking price for whatever tat the teams eventually came up with.

The utter dross that the teams thought up made me correctly conclude that these overpaid billionaire-wannabes know more about drain-storming than brain-storming. What utter sewage. A crappy looking doggy wardrobe was one team’s uber-work. Literally a tatty Formica box complete with silver bone shaped door handles into which the nutty dog owner could throw all their expensive doggy paraphernalia. It looked like a mini wardrobe for a white trash Barbie. But at least it was better than the “dog nappy” idea that they originally came up with. The other team – the boys, naturally – came up with a Rambo style utility belt for the hapless dog owner. It featured removable pockets into which the canine fan could shove bones, balls and pooper scoopers galore. It’s a real shame it didn’t have an auto-destruct button.

Christ. And these people are the business world’s elite?

Sir Al would be better off employing me. I came up with three sterling doggy-gadget ideas within ten minutes this morning and here they are for your delectation.

1) The Dog Papoose. Simply a Velcro Coat for both owner and dog so that the fashionable dog owner can carry their fatigued mutt easily and safely attached to their own chest or back. Obviously such a mode of carriage is not recommended for un-gelded Alsatians or Mastiffs.

2) Take ‘Im Out In Style. You know the situation. Your hound is on his last legs and needs to be put down fast but you can’t afford the extortionate veterinary fee – not and buy the new PlayStation 3. What you need is the Take ‘Im Out In Style dog taser gun. Delivers a massive electric shock which will painlessly fry your pooch for a fraction of the price of a lethal injection. It’s a darn sight more entertaining too. Who said dogs can’t dance? The tag line for this product could be: Take ‘im out for the last time... take ‘im out in style!

3) I’ve saved the best till last. The Sugar Shagger. You want your canine pal to sow his wild oats so you’ve left his undercarriage intact. Unfortunately he tries to hump everything and everyone in sight as a consequence. If only there was something he could expend his four-legged energy and seed upon. Well, now there is! The Sugar Shagger. Carefully moulded from synthetic easy-clean material the Sugar Shagger’s behind is modelled on the best canine rump available (this year’s Cruft’s Winner or Posh Spice – not decided which yet). With full working parts and “service hatch” The Sugar Shagger will allow Fido to have his way harmlessly and safely until such time as you can get him a real doggy piece of ass. But here’s the clever part. You know how branding is important? Corporate identity is essential to a good sale? Well the front end of The Sugar Shagger is expertly modelled to resemble Sir Alan Sugar himself. Watch his beard wiggle as Fido buries his bone. Watch his piggy eyes light up as Fido howls his ecstasy. And at the moment of climax Sir Al’s voice will bring Fido back down to earth with a gruff, “You’re totally spent, son, you ain’t no good to me... you’re fired.”

Last summer whilst sitting in our local park I saw a woman carrying her dog around in a baby sling, strapped to her chest. The woman said she didn't want to get her dog too tired!

Curses! Someone's beaten me to it! At least there's still hope for The Sugar Shagger. I need to get the patent put in fast!

Woww... so the sling thing IS real...!
Yes, Steve, you've left the best til last. My dog had the same problem, and I tried to make him one, but it just turned into something like a specially-shaped pillow, cos I couldn't figure out how to make the 'hole' he could fuck (still, I made up for it by holding and shaking it while he humped it, and never washed it, so that whenever he smelt it, he'd know it was time to fuck). But with the proper designers, I'd definitely vote for this as the most usable and beneficial necessity! Guess these guys never owned male dogs...:-)

Just a spoonful of Sugar helps the medicine go down! Saturday gave us the Judoon Platoon upon the Moon while on Wednesday we were treated to the equally-marvellously named shifty thrifty Ifti!!

Wow Eve! You deserve a medal for your efforts to benefit dog-kind! If I'm ever reincarnated as a dog I hope you're my owner! ;-)

LOL! That's a wonderful compliment! I'd have got him a bitch, but was afraid he'd get STD. No nice clean girl dogs around... ;-)