Is There Life On Mars? Definitely. 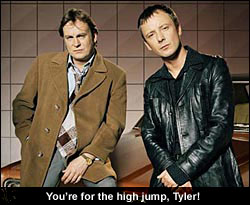 The Great Work has finished.

Tuesday nights will never be the same again. I feel as bereft as when Cracker came to a close.

So – was the conclusion of Life On Mars worth waiting for? Did it manage to fulfil every expectation, every need, answer every question and give everyone a believable happy ending?

That would be a tall order even for Shakespeare!

However I think the writers did the job rather nicely. The episode was poignant and sad. It kept me and Karen on the edge of our seats all the way through. It answered so many questions but raised a whole load more. And most of all it played with our heads mercilessly right up to the last moment.

Was Gene Hunt the tumour or was it Frank Morgan? Did Sam make it back to 2007 or did he stay in the coma the entire time. Did Sam commit suicide or just leap from one reality to another?

Half way through I was convinced that Frank Morgan was the cancer wanting Sam to abandon Hunt and Co. – all the people that have contributed to Sam’s formation and upbringing – in order to take over his brain and kill him. Frank was after all from C Division.

At the end, back in 1973 the radio garbled the words “He’s slipping away from us…” and Sam deliberately changed channel. Is Sam dying or is he slipping further into a coma that he never actually awoke from? The camera angle rising upwards as they drive away would suggest that he’s dead… but it is only a suggestion.

I actually like having the ending so enigmatic and open. The writers have performed a work of sheer genius in my opinion. What’s the best way of pleasing everybody? Give them a choice! Answers are there if you want them but they’re fluid enough that they can be turned to fit any number of theories. You choose.

For me what matters most is that Sam was true to himself.

That’s what the entire series has been about after all.

Got to be worth tuning in to Gene Genie. There's always Desperate Housewives to keep me going after Life on Mars has ended.

I like ambiguity in writing too, Steve. A little suggestion here, a hint there. Presenting an open and shut case, so to speak, is talking down to an audience if it’s a discerning one that prefers to use its own imagination.

One of the reasons “Twin Peaks” is my favourite American show is because you’re not entirely sure what’s going on and whether a character means this or that. And in the end it doesn’t really matter when the feel of a piece is enough to convey the writer’s message.

“The Prisoner”, “The Singing Detective”, and now “Life on Mars”… all these shows do away with linear narrative, to a certain extent, and are the better for it. Leave the spoon-feeding to the soaps!

Enigmatic is good.
I am definitely looking forward to the return of Gene Hunt.