Up The Spears Of Sparta! 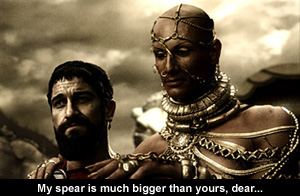 Karen and I experienced the visual butch-fest that is 300 the other day – the latest film by Zack Snyder based on the graphic novel of the same name by Frank Miller.

And what a visual feast it was too. Beautifully restrained colour palettes, titan-esque picture composition, manly voices deeper than Barry White’s g-string and a super baddy who was camper than Charles Hawtrey in a pink tent pitched by the side of a Cornish Maypole.

There are definite homoerotic motifs present throughout the film – the Spartans are all incredibly muscular and spend the entire film prowling about with hardly any clothes on, thrusting their mighty spears into an unending host of enemies. The main bad guy himself, Xerxes, is a 9ft giant who in the words of one reviewer (whose name I forget) looks and acts more like RuPaul than a Persian God-King-Warrior. He is also in charge of a grotesque harem of carnivalesque and misshapen concubines that reminded me more of a monster-mash of creatures from Clive Barker’s Hellraiser films than a true Persian harem. But hey – what do I know?

The audience is therefore presented with the implied effeminacy, homosexuality and fetishism of the Persians and the manly, strength-as-virtue, battle honour heroics of the hugely outnumbered Spartans. For me such over-simplified divisions are a little too uncomfortable to palate. I was also uncomfortable with the politics of the film – the West (Greeks) versus the East (Persia) – given the present world predicament, though the whole premise could easily be turned upside-down when you consider that the West / America has more in common with the vast hordes and fire power of Xerxes than the poor outnumbered Spartans facing invasion by a foreign enemy...

The film also shamelessly glorifies violence and death in battle. I realize the film makers are merely trying to give us a flavour of the Spartan ethos that led 300 men to face an entire army but in the morally conscientious world of 2007 such machismo carries undertones of foolhardiness – for all the Spartan’s stand is deeply heroic and truly admirable.

Despite my problems with the film though I really enjoyed it. Yes it is violent but there is something cartoon-like about the violence that stays true to the visual nature of the original graphic novel: it’s cartoony but not in a desensitizing sense although it does allow the audience to offset the horror of bloodshed a little. That sounds like a paradox but I can’t really explain it any better. Go see the film and you’ll understand what I mean. Visually the film is stunning – it is sumptuously photographed – and provided you disengage your politics and any historical knowledge beforehand it’s a film that most people I think will enjoy.

Slightly off the subject, although you did mention it in passing, but I just caught "Hellraiser 4" for the first time. Really odd.

The action was set in the future, on a space station, before switching to the past then the present. And, Pinhead had far too much to say for himself to retain any enigma. Characters were also left forgotten. Obviously not enough work on the script!

Thought I'd mention it as you pointed out, previously, that the subsequent films aren't as satisfying, if that's the right word, as the first two in the "Hellraiser" series. You were right!

TimeWarden: as you rightly say - too much of anything is demystifying... the whole Hellraiser franchise has possibly gone of for too long and should have been cut after the first 2 decent-ish films!