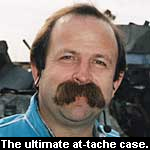 Ten things you can do with the amazingly prehensile moustache of Dick Strawbridge, the Rex of Recycling on the BBC’s It’s Not Easy Being Green...

1) Weave the bristles into an amazingly robust kagoule that preserves body heat, protects against rain and allows you to strain homemade vegetable soup through the fabulously glossy fibres.

2) Wax, plait into spikes and imbed in the bottom of a freshly dug pit. Dick’s excellently nourished follicles are well known for having the strength to impale wild boars and grizzly bears upon the razor sharp points of their split ends.

3) Placed against a tree at an angle of 45 degrees Dick’s face curtain can be made into a makeshift bivouac when you are caught outside in the hostile elements unprepared. Dick’s heavy nasal breathing will also act as a comforting heat source. Be careful not to light a campfire though!

4) Carefully removed from Dick’s top lip and preserved in quick hardening resin the mighty moustache of manliness can be utilized as a highly effective boomerang. Not only will it break the neck of any passing kangaroo but it will also catch a shed load of witchetty grubs within its fur matting. A main course and dessert – what more could you ask for?

5) Finely chopped and added to a crucible containing iron ore, fired to a few thousand degrees Celsius and tempered in spring water for several days the resulting tensile-intensive blade can be worked and sharpened into an edge so sharp it can cut through the dimension of Time itself. It’s also great for skinning rabbits and paring fingernails.

6) Removed whole and the upper portion glued to a strip of elastic Dick’s hairy slug makes a quick and easy replacement for damaged or besmirched underpants. It fits all sizes and is completely unisex. Due to its patented maximum ventilation technology the Dick Pants will keep your bits and bobs cool and comfortable. Also doubles as a handy brush for the safe removal of winnits.

8) Mixed with mud and river clay, the resultant wattle and daub can be used to caulk damaged canoes, fishing boats and Trans-Atlantic cruise ships to protect them against water incursion, barnacle build up and terrorist attack. It is also guaranteed iceberg proof.

9) Diced in a Kenwood and added to a concoction of oysters, chocolate and Drambuie this highly potent potion will have the desired object of your lust eating out of your hand and wanting you to stroke them with your own bodily love follicles... simply add a couple of drops to a glass of wine or as the topping to a baked potato and your wicked way will be had. Hey, it works for Dick. Allegedly.

10) Feeling rather breast heavy? Super strength cantilevered endurance bra finally failed you? Simply tie the ends of Dick’s moustache together at the back of your neck and rest your nellies in the resultant bap hammock. The moustacho-bra can be removed from Dick’s top lip to make it more portable or if desired can be left attached so that Dick’s happy go-lucky mouth can act as a heatsink, thus keeping you cool as well as advising you on the best way to go green and save the environment as your boobs are transported safely and stylishly with you wherever you may chance to go. A similarly arranged nob hammock is currently at the testing stage of production.
Posted by Steve at Friday, April 27, 2007
Email ThisBlogThis!Share to TwitterShare to FacebookShare to Pinterest
Labels: baps, baptitious, BBC, DickStrawbridge, moustache, pants

Huh? You've completely flummoxed me there, my friend! Do, pray, embellish!

I found this comment whilst looking at green isues, it is from Mr Dickie Strawbridge TV's favourite moustache.

The best idea I’ve seen to tackle climate change is…
I’m working with a company that has found a way of capturing CO2 emissions from internal combustion engines, which could mean that soon cars, power stations and any form of motor powered by fossil fuels won’t contribute to climate change.

If this company has achieved this as Mr Strawbridge is saying then we are looking at the next Industrial revolution as discribed by Mr Gordon Brown earlier in the week.

The comments were of this being worth Trillions to the British Economy and a million new jobs for UK workers.

Does anybody know who they are as every company in the country, nether mind the world will need there services. If Al Gore got a Nobel peace prize for a film on Climte Change, what will these guys get for actually halting it?

I look forward to reading the next issue, maybe finding out who they are?

Are you THE Clare? As in Gilbert O'Sullivan?