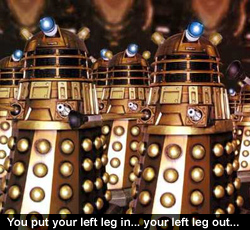 Four weeks into the new series of Doctor Who and it’s safe to say that Freema Agyeman has stepped up the plate admirably – she fits the bill, does the job, wears the hat and every other euphemism that defines universal acceptance.

The ghost of Rose Tyler has been well and truly exorcised. Helped no doubt by the fact that for the first time this season she wasn’t name-checked at some point by the Doctor. Much as I liked Rose it’s time she was laid to rest.

And what of this week’s dynamic Dalek dichotomy?

In the words of my wife, Karen, the story was "classic Doctor Who" and that is high praise indeed. Daleks trundling menacingly down dark, murky corridors, American’s being genetically transformed into pig-men and a chorus line of gorgeously nubile NY broads. Hey – everything you need for a worthwhile Saturday night in.

I was dying for the Daleks to join the chorus line. Seeing Black Dalek Sec doing the Chattanooga choo choo would have been a marvellous piece of television. Ah well. Never mind. Maybe next week.

I liked the whole ambience of 1930’s New York and thought the show handled it well. It’s a big period to take on and capture but the show’s producers did so convincingly.

The story was excellent too – finely paced, plenty of action, political comment, social comment and fantastic emotion. Despite the proliferation of the Daleks the human element of this story was massive and helped make it a winner in my book.

My only niggle is the idea of the Daleks bending their obsessive adherence to species purity and splicing themselves genetically with humans – a far inferior species. Sure, I can understand the argument they expounded – the need to ensure their survival in the face of imminent extinction but even so. Why pick humans? Why pick the 1930s?

Why not splice a Dalek with a dolphin instead? Just as intelligent. Better swimmers. And they’ve got lovely disarming smiles.

I really didn't like what I seen on the front of the Radio Times this week,the Dalek Mutant or whatever it was looked very substandard when compared to creatures like the Ood that Neil Gorton has done,this was more of a throw back to his work on Space Precinct.
I liked what they were trying to do in this episode but it's always going to be hard selling Cardiff as New York, and I thought that the musical number at the theatre looked embarrassingly small in scale.
Still Doctor Who is always fun and I'm looking forward to next week.

Like your high-stepping chorus line of Daleks, Steve. Made me smile!

Your wife is spot on when she says it’s “classic Who”. If last year’s Ood story is the equivalent of the original series’ “The Caves of Androzani” then “Daleks in Manhattan” is the corresponding story to “Revelation of the Daleks” which does indeed feature dark and murky catacombs. Always a good idea to set a story partly underground both in terms of budget and atmosphere!

The love story between Tallulah and Laszlo is pure “Beauty and the Beast”, or “Phantom of the Opera”, which was also the basis of the finest “Who” story of the 80s, the aforementioned “The Caves of Androzani”. And, as the saying goes, if you’re going to borrow, borrow from the best!

Never heard the Doctor described as “a hot potato in a sharp suit” before!!

Dr Who is still a great deal of fun. Am I the only adult who sits watching it from behind a cushion on the sofa, oh, you know, just for old time's sake?

Glad you enjoyed it Steve - I have to say I was a bit disappointed with the episode in some respects - more on my own blog later...

I agree Freema is getting better and better though and yay! They didn't mention that Tyler wench once!

Although they're still looking good, I personally think the Daleks are getting overused now and should be laid to rest after this story. The Sec-Human hybrid cliffhanger was considerably ruined by putting him on the front cover of the RT (WHY??)

Daleks/Dolphins - could be an interesting one...