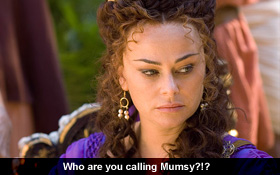 Hell. I’m wearing a toga as I type. Tentpole Toga. Hmm. Isn’t that the name of a punk band?

Anyway last night’s episode – the first of series two – kicked off immediately where the story had ended last time. Caesar’s crumpled and knifed body lying in a pool of blood and ordure in the Senate and his followers all running for their lives.

Straight in and no messing. That’s the style I like.

Polly Walker is back as the conniving Atia and although she’s looking far more mumsy around the edges than in the last series (and that’s not a complaint by any means) she still retains enough of a predilection for casual viciousness to make her character one of the most interesting on the screen. Her heaving bosom has absolutely nothing to do with it at all. Honest.

With a pushy mother like that no wonder Octavian went on to become one of Rome’s most successful emperors.

It’s also good to see Kevin McKidd and Ray Stevenson back as Lucius Vorenus and Titus Pullo respectively. They’re both great characters and generally provide the proactive element of the show. While the Senators and the women plot and scheme Lucius and Titus are the ones who go out sword in hand and with the barest of nods lop off a few heads. Plus a few arms and legs. And feet. And anything else that might be dangling loosely. It’s not a good idea to get on their bad side. Heads will roll. Literally.

Which is not to say that the artistic side of their performance and dialogue delivery is not uniformly excellent too. There is a surprisingly subtle interplay between the two characters which is oddly affecting. This despite their penchant for thuggery and gory sword work. For me they are the engine of the show. Roaring away (not so quietly) in the background, providing the fuel, the motion and inevitably the spectacular car crashes which frequently punctuate the plot development.

The cast and producers of Rome have managed to both capture the flavour of the period and to modernize it sufficiently that it seems socially and politically relevant to today. An achievement that not everyone can accomplish (the producers and writers of the Beeb’s Robin Hood take note).

Is it really worth watching? I have wondered about it quite a bit. The bloke who played Jez Quigley in Corrie looks good in it. Is he?

Lee Boardman plays a servant called Timon - one of Atia's pawns and he secretly lusts after her. She's obviously very disparaging which I think is going to lead to an explosion of resentment later...

In the first series Timon had quite a small part and though I don't think it's going to be huge this time round I think from the trailers I've seen he's going to have a meaty scene or two.

Karen and I think it's great. I'm sure Roman historians are pulling their hair out in anger and frustration but it's nice to see something so ambitious on the BBC. The locations and sets are spot on and the acting is top class. Pure escapism and a little something of the exotic. Just the thing to brighten up those mid-week blues!

I might rent the series then from what you say.

How is your novel getting on?

Hi Janete, not too bad - slowly approaching the 50,000 word mark. I'd say I'm about a third of the way through the story... and things are about to get nasty! I will post another excerpt soon...

Hi Steve - I agree about Rome being high quality TV - I love it. It's not massively historically accurate however. If anyone wants to know the real story I can recommend 'Rubicon' by Tom Holland. It's a well-researched history book and a belting read in one.

Thanks for the recommendation, Tris!