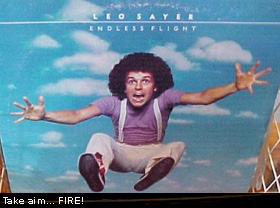 Very unwisely I tuned in to the launch of the new Celebrity Big Brother last night. Within minutes I wished that I hadn’t... and yet continued watching.

Just what IS the pull of this damned show? It’s like it exudes some form of electronic monosodium glutamate that keeps everyone going back for more no matter how sick of it we all are. That and the fact you can’t join in work conversations the next day unless you have the complete breakdown of the ridiculous BB events that occurred the night before.

Christ but they're a rum bunch of has-beens this year. Ken Russell looks like he’s suffering from dementia. Jermaine Jackson looked bewildered and totally freaked out by his housemates (you’d think he’d feel right at home really). And Danielle Lloyd thought that Winston Churchill was America’s first president. Geez-us!

The only housemate who gets my vote is Cleo Rocos. Mainly because I used to love the Kenny Everett Show as a kid and during its hey-day I developed a huge soft spot for Cleo. Well a huge hard spot actually. There is something about Cleo Rocos that is just made for skimpy French maid outfits. Well, there are two things about her really. Oh! Enough of this prurient banter!

Anyway the thing that has appalled me most is that Leo Sayer has been tipped as the bookies favourite. Leo frigging Sayer?!? Come on! He is the most annoying man on the planet. He has the most annoying hairstyle on the planet. He’s modelled himself on a 1970’s variety show microphone. He’s about as cool as ordering Saddam Hussein eyeball soup at a Sunni Muslim convention. Just check out the cover to one of his God-awful albums above. I mean pleeeeease. The only thing that pleases me about this picture is that I can easily imagine a shotgun wielding maniac off-camera at the bottom of the picture emptying both barrels into Leo’s midgety little guts and blasting him bodily up against the ceiling.

Danielle Lloyd's grasp on geography is also a little worrying as she was not too sure on the location of the New Forest when talking to Ken Russell.
Though I'm sure her talents lie in other areas.