This Is My Theme Tune… 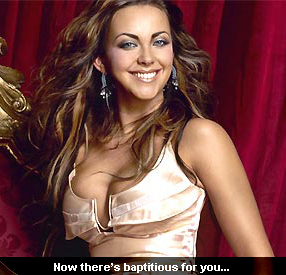 For some reason I try really hard to like Charlotte Church.

There’s something fresh faced, unaffected and honest about her. A youthful sense of fun and fair play that I like and a refreshingly healthy attitude to her body image. Who cares if she occasionally puts on a few extra pounds? She always looks gorgeous and fab to be with.

And before I kick off into the meat of this post I must also point out that I love Wales. Both Karen and I do. We’ve been going to the place regularly for years – as often as we can – and even chose to get married there in a beautiful little mining village called Abergynolwyn. We’ve always found the Welsh people to be warm, wonderful and endlessly helpful. We are seriously considering moving there one day. Wales is great. The BIG country indeed.

But for the life of me I cannot abide The Charlotte Church Show.

I gave up watching the first series after the first episode. It was appalling. Tacky, amateurish, coarse in an unattractively pedestrian way and appealing to all the lowest possible denominators. Not a good vehicle for Charlotte’s talents or for Wales.

I therefore approached the first episode of series 2 (broadcast on Friday) with some apprehension. I’d heard tales that Charlotte had learnt from the mistakes of her previous outing and this series would be a big jump up the professional scale of quality. Fair enough, I thought. She’s only 21, bless her, she’s allowed to make mistakes and find her way.

So I tuned in. And, despite the dynamic Billie Piper being one of her guests, I had to turn the damn thing off within the first 15 minutes.

It was embarrassing and uncomfortable viewing.

The trouble is, although Charlotte’s youth and ebullience are part of her charm, these qualities betray her when it comes to the role of interviewer. She’s too gauche and inexperienced to perform an adept interview.

A good interviewer must have some worldly wisdom, some knowledge of the human condition which they are able to utilize and manipulate in order to tune into their guests and bring out their very best. As it is Charlotte’s guests always seem to be far more mature in their outlook and bearing than she is and the effect is to make Charlotte look inane and blank. She doesn’t seem to connect with them on any intelligent level at all. Which is a shame because Charlotte is not stupid.

Her writers however are and should be shot. The jokes are awful. That dreadful "theme song " ditty is diabolical and should be scrapped. It makes me cringe to think of it. It isn’t funny and it has the effect of making Charlotte look as if she can’t sing for toffee. Well done, guys. You’re not only misrepresenting Charlotte’s talents you’re also destroying them!

The humour of the show is coarse and explicit but it’s handled lazily. This is a mistake. Using coarse humour well is a great skill yet people constantly make the mistake of thinking that it is the easiest way to get a laugh. It isn’t. The Friday Night Project employs coarse humour superbly. So does Graham Norton and shows like Never Mind The Buzzcocks and Little Britain. But handled badly it just comes across as prepubescent and tasteless.

Charlotte doesn’t have the skill to deliver coarse humour well. It just makes her look oafish and a bit of a ladette. Fine if all you want to appeal to is the beer and lager consuming members of the public who are too drunk to have any discerning qualities one way or another. Not so good if you’re trying to sell a modern vision of Wales to as broad a spectrum of the British viewing public as possible.

I’m not Welsh. But I can’t help feeling that The Charlotte Church Show is an insult to Wales, the Welsh people and to Charlotte herself.

I caught a bit of her last series and I remember not being desperately impressed. You're right, someone like Graham Norton does the coarse humour bit much more effectively. For example, his new chat show which has just re-launched on BBC2 is great - the same formula as So Graham Norton on Channel Four but he always does it so well, so if it ain't broke, why fix it?

Charlotte on the other hand doesn't have the age and/or experience. Maybe in a few years she'll get better at the whole thing. In the meantime I think she should lie low for a bit!

I've never seen the show, so can't comment on the truth of your words (although I have no doubt as to their veracity). Interesting clip, though (watched it loop thrice before I could drag my eyes away); who is it?:-)

Not at all, Eve, feel free to help yourself anytime!

There was a rather sarcastic preview of "The Charlotte Church Show" on Teletext suggesting Paxman better watch and learn! It mentioned her rugby playing boyfriend always attends recordings and gives her advice such as how to carry the ball!!

Best of all was a link, at the bottom of the page, referring readers to an interview with Charlotte, on a page on C4 Teletext, after which it read, in brackets, "Not in Wales"!!! Had me in stitches, seeing as they're possibly the ones most likely to want to read it, but I presume they have their own S4C text pages. Oh, the irony!!!!

Ah - one of life's universal truths: behind every great woman is a rugby-playing boyfriend-advisor...

No jokes about hookers please.

I too have never watched the show but I personally think that doing something other than too much singing might be good for her voice at the moment as she did start singing very young and too much work can take it's toll on a voice.Though I think she could do something better than coarse humour.
She has a nice voice, a charming personality and enough confidence to do whatever she wants.So my message to Charlotte would be,'do something a little bit more stylish.You know you can'

Yes, agree totally. Some injection of style would be good!

I was hypnotized by that bottom clip,it took my phone beeping a text message to me to break me out of the trance !

The good thing about Charlotte is she uses her words well. Too many others use three words when one word would suffice! Go Charlotte!
Love,
Elen
Daughter of Mother of Many and writer,
trying to make shorter sentences cool!

I came by from mother of many-THAT's little Charlotte Church.

Iewww. What was she thinking?

Hi Andrew, alas I cannot take credit for the animated clip as I nicked it from another site... but I agree it is strangely hypnotic.

Thanks for dropping by Elen - good to hear from you. As a writer I agree that short, concise, elegant sentences are always cool!

Hi Chris D, yep that's little Charlotte all right. Though not so little anymore... and due to get bigger. She announced to the world via her web site yesterday that she is pregnant. Don't think she'll be shaking her booty around quite so much in the future!

I'm back watching that clip again, you should charge !! :)